This post contains spoilers, so flee the tomb if you don’t want to be cursed with knowledge of the plot. 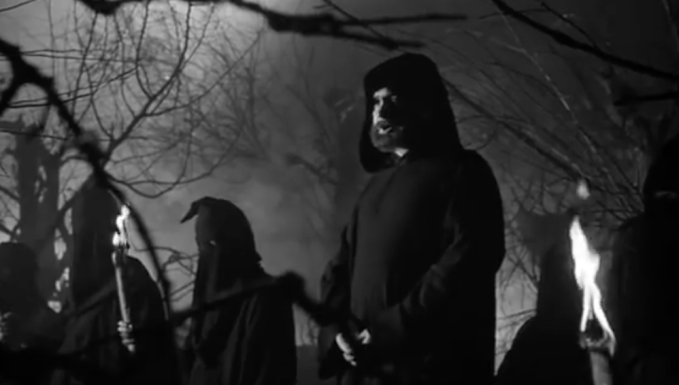 In the 17th century, Satan was abroad on the Earth. And great was the wrath against those monstrous beings thirsty for human blood to whom tradition has given the name vampires. No appeal for pity or mercy avail. Brothers did not hesitate to accuse brothers. And fathers accused sons in a frantic attempt to purify the Earth of that horrible race. Blood devouring assassins…

The credits role over Asa’s mask, and inform the audience that this is a “Jolly Film Production”. Talk about irony. Before Asa and her consort, Juvuto, can be consumed by the “purifying flames” of the stake, rains come and thwart the village entertainment for the week. Asa is buried in the tomb of her ancestors after the unsuccessful burning, while Juvuto is covered in “unconsecrated earth and buried in the place reserved for murderers”.

Two hundred years pass, and two men riding in a carriage, which is unusually calm for a horror film, are shown. Dr Kruvajan and his handsome assistant, André, are on their way to a medical conference in Moscow. Dr Kruvajan bribes the coachman to go through the woods that Asa’s ghost supposedly haunts, in order to save some time. Despite him assuring André that they had plenty of time not five minutes before. What could possibly go wrong?

In a great plot twist, the carriage wheel is broken quite severely. Even though the carriage driver assures that it will be fixed quickly. Dr Kruvajan and André decide to venture into a misty, abandoned castle in search of the source of some ominous howling, which turns out to supposedly come from some old organ pipes. They then decide to venture into the tomb below the castle. Once again, what could possibly go wrong?

Dr Kruvajan then provides some handy exposition about the the Vadja clan, whose entire family history is now relegated to the mouldering tomb that looks as if it could double as Elvira’s summer home. How Dr Kruvajan knows all of these details about an almost extinct Russian aristocratic family is not explained. Perhaps he took an elective on doomed Russian blue bloods in university.

The two men find Asa’s coffin, which seems to be lit up by some invisible light source. A bat that has been living in a skeleton riddled alcove in the tomb attacks Dr Kruvajan, which results in the glass covering over the coffin and the crucifix above, both of which were keeping Asa in her tomb, being destroyed. Dr Kruvajan’s complete lack of self preservation and outrageous meddling, are reinforced when he removes the mask of satan to expose Asa’s insect riddled face. In for a penny, in for a pound.

André observes that the intuition-less doctor has cut himself on the glass covering Asa’s now exposed face. His blood, which has collected on the glass, drips onto Asa’s face. What. Could. Possibly. Go. Wrong? Once emerged from the tomb, Dr Kruvajan and André encounter Katia Vadja, who is identical to her ancestor, Asa. André and Katia are instantly attracted to each other, with André trying to catch one more glimpse of her as he and the meddling doc drive off in the carriage. Once inside the carriage, André realises that he has taken a souvenir from the tomb. Because you really wouldn’t notice if you took a small, hand-painted tableau of Saint George from a millennia old tomb under a ruined castle.

Asa’s face is then shown. And it is reanimating. It cuts to Katia playing the piano, while her father, Prince Vadja, sits miserably before the fireplace. He then realises that the griffin in the portrait of his dead wife, who also looks like Asa –what a surprise– is dead. This is alarming news because griffins in painting don’t just die. Katia admits that she has always been drawn to the painting due to its mysterious quality. Even though a supernatural occurrence that is probably really bad news for everyone has occurred, the Prince bids his children goodnight with an odd, infantilising kiss to the forehead. The Prince seems to be feeling the effects of Asa’s curse as he sees death in his hot toddy, and drops it on the floor. What a waste.

André and Dr Kruvajan are staying at a busy inn, and André is positively sozzled, which leads to him retiring to bed early after almost braining himself on the beam over the stairs. In the meantime, Asa summons her undead accomplice, Juvuto, to rise from the dead while she’s snug as bug in her tomb. Juvuto rises from his grave and pries the mask off his face. Ow. 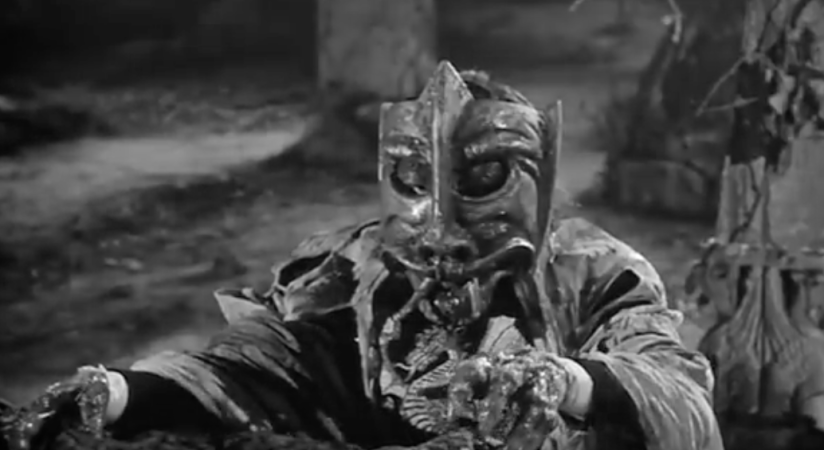 Juvuto makes a house visit to the Prince, first appearing as wind in the castle and knocking over furniture. The Prince manages to dispel him with a crucifix but this really takes it out of him, and he falls into a semi-coma. Katia and her brother bid the servant to collect Dr Kruvajan at the inn, but the oblivious doctor is collected by Juvuto instead. A local girl, who for some strange reason had to milk the family cow around midnight, observes this. 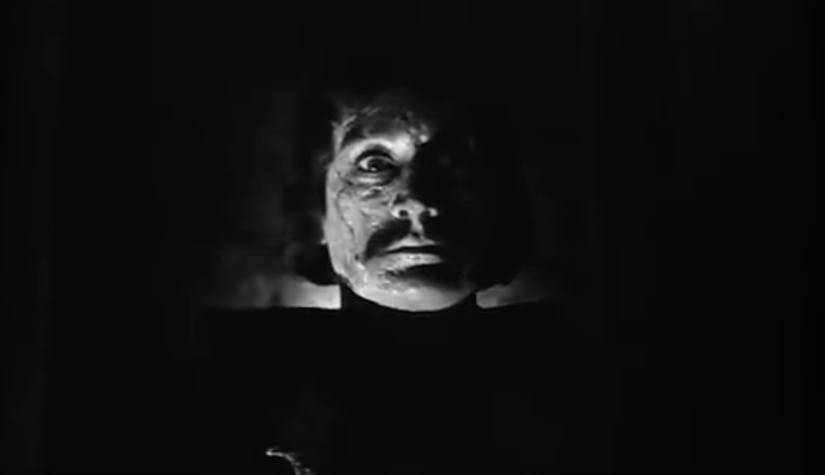 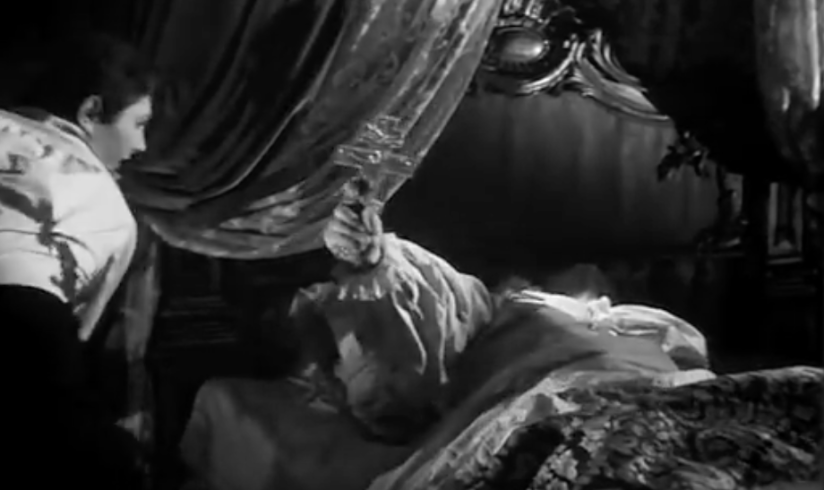 When the doctor and Juvuto arrive at the castle, all is quiet and dark. Juvuto leads the doctor through a secret passageway in the fireplace. Dr Kruvajan only realises that something is amiss when the lantern that his pockmarked guide was holding, is floating in mid-air. He wanders down into the tomb, where Asa’s coffin explodes (that girl does nothing by half) and she lures Dr Kruvajan to her, where she feeds off of him via a kiss. In case anyone in the audience is confused, Asa helpfully explains why she needs to drink the good doctor’s blood.

Dr Kruvajan then arrives at the Prince’s bedroom looking rather shady, which no one notices, and says the Prince is suffering from slight shock. I suppose this depends on what your definition of “a slight shock” is. Katia, who sleeps rather oddly, with her head at the foot of the bed and half her body hanging off the mattress, is awoken and told by her brother that the Prince is dead. His face is scarred as if he has been attacked by an animal.

André realises that Dr Kruvajan has disappeared from the inn, and goes to the Kadja residence upon learning that he was supposed to have been summoned there. Boris, the groom who was supposed to fetch the doctor the night before, is found dead in the river, as pointed out by an impatient local. Katia has a nervous attack upon learning of her father’s traumatic death, and is carried to her room by André. He pervs over her while undoing her dress, which gives him the opportunity to observe that she is wearing a crucifix. Callback for latter.

Boris’ corpse is taken to the church, where the priest is infuriatingly evasive about Juvuto when André says he has seen Asa’s main undead squeeze. Katia is then seen undressing for bed, and removing her crucifix. Of. Course. André and Constantine think that Katia is hysterical after she sees a hand through her curtains. André rushes to his room to retrieve a sedative, because there’s nothing like drugging a woman when she’s mouthy. There he speaks to Dr Kruvajan, who has suddenly materialised through a hidden door, before the latter flees after warning André to leave before more bad things happen. André gives that advice a most decided nope.

André tries to give an, unsurprisingly, extremely depressed Katia, a pep talk in the garden while rather incongruous romantic music plays. Katia obliquely friendzones André when he tries to propose marriage to her. Because she’s probably feeling a bit raw about her father being mauled to death by an undead doctor.

By a “happy” accident, André and Constantine discover Asa’s tomb through the portrait of Juvuto.  Thanks to Dr Kruvajan’s blood, she is fully reanimated and no longer looks like her face has been stomped on with a golf shoe. André and Constantine decide to split up, and André retrieves the priest. They go to the graveyard, where the now undead doc has taken up residence in Juvuto’s grave. André and the priest novelly stake André’s former mentor through the eye. It is unsurprisingly juicy and the priest has to make use of his handkerchief in the aftermath. Meanwhile, Constantine and Juvuto have a tussle outside of Asa’s tomb (talk about the undead centre of things), and the former falls through a trapdoor in the floor.

Unsurprisingly, Katia is left alone in the castle, and witnesses her father rise from his coffin which? is? in? the? living? room? Juvuto throws the undead Prince into the fireplace after he tries to snack on his own daughter.  He takes Katia to Asa for Asa to drain her descendent’s blood, so she may live forever, which she, once again, helpfully explains, in a rather smugly triumphant manner. She claims that Katia was only born to act as the means for her eventual return, and that was why she was always drawn to the painting. Callback, anyone?

It is now André’s turn to have a tussle with Asa’s loyal lover, but Juvuto is dragged into a stake riddled pit by Constantine, who dies in André’s arms. André rushes off to Asa’s tomb to save Katia, who has been rendered unconscious by her ancestor. Asa tries to trick André into killing his love, but he sees Katia’s crucifix and realises he has almost been played. He approaches Asa, who flashes her frighteningly fleshless ribcage at him, before launching into a monologue whereby she explains her joy at having destroyed her descendants, and tries to hypnotise André as she did his mentor.

Luckily, she is thwarted by the locals who rush into the tomb and carry her away. They burn Asa at the stake, which restores Katia’s life force. Katia and André kiss as Asa is consumed by the flames, which rage unabated due to no handy second round of rain.