Swimming Around the Point, Just to do the thing

Laura (played by Esther Williams) is a fashion model working in Rome, who has “run away” from her millionaire lover who is actually a married man. Said married man sends a representative, Wally, to come and “fetch” her, which she reluctantly agrees to despite her lover always promising to, but never actually getting a divorce. 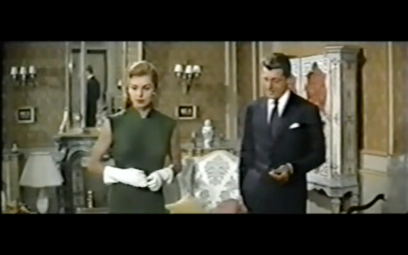 She and Wally fly through a terrible storm and crash on a small Mediterranean island off the coast of Sardinia. Laura is unharmed, but Wally’s leg is impaled with metal. The island inhabitants, who only consist of the mysterious Moore (played by Jeff Chandler), Urbano (played by Eduardo de Fillipo) and Urbano’s barely legal granddaughter, and Moore’s soon to be wife, Costanza (played by Rossana Podestà). They seem reluctant to help the stranded pair, but eventually help get Wally out of the plane. When he is conscious again, Wally realises that Moore means to sow his wounded leg up with rather primitive means due to the lack of a doctor on the island. He passes out again. 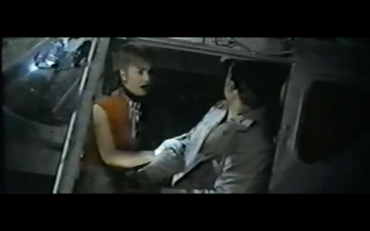 Laura and Moore put a distress signal up on the chimney of the small shack in which Moore, Urbano and Costanza live, in the hope that it will attract passing vessels. Moore informs Laura that it could be as many as five weeks before they are rescued. When the signal disappears, Laura accuses Moore of removing it and complains about the primitive island living conditions, as well as Moore’s anti-social behaviour. Moore is unmoved. While Moore won’t disclose much about his past, Laura admits that she has had a difficult life, largely because of wealthy men. Moore is, of course, unimpressed with her ambition to live comfortably as some wealthy man’s mistress. 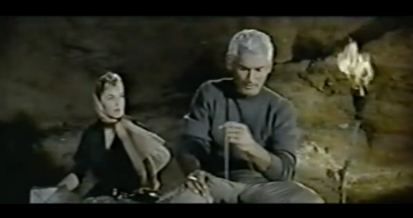 Laura and Wally find a beached boat on the island and suspect that Moore deliberately beached it. They discover a few telling things inside the boat, such as alcohol despite the fact that Moore never touches a drop, and a medal of honour. Wally tells Laura to ask Moore if they can use the boat, but Laura pleads with Urbano to do so on her behalf, and also tells him how much she hates the island. Urbano concedes on her behalf and Moore seems happy to allow she and Wally to fix and launch the boat, although he says it will be very difficult.

Wally and Laura set about repairing said boat. Wally then admits his intense attraction for Laura. She doesn’t reciprocate, and only kisses Wally to make Moore jealous. Wally is annoyed by this and warns her to be careful of Moore who he calls a “psycho”. Pot calling kettle black.

A young man then rows up to the island and starts shooting at Moore, who returns fire but deliberately misses. Wally is furious that Moore has scared off a potential rescue, although Moore says the boy wants to kill him. Wally and Laura get drunk, leading her to have a terrible hang over the next day. Urbano explains that the boy is Gavino, a “date” farmer (which means he dives for mussels) who wanted to marry Costanza, but was slighted when Costanza decided she wanted to marry Moore, who she will wed in Spring. Laura is surprised and displeased by this news, and despite her hang over, swims around the point of the island, which unsurprisingly exhausts her due to the strong currents, which Moore warned her about. She apologises to Moore about her fool hardy endeavour before they kiss. She admits her attraction for him, but chastises him for his escapist way of living, before he and Wally have a physical altercation which Moore wins.

Laura and Wally make good progress on the boat and are ready to leave the island by the end of the week. Urbaro, Moore and a reluctant Costanza hold a farewell dinner for Laura and Wally, but Wally refuses to leave the boat due to it being repeatedly sabotaged, apparently by Moore, whilst they were fixing it. Laura attends the dinner, which upsets Costanza because Laura and Moore dance to a record that Laura made in America. The dinner is tense when Moore goes back on his word about selling the boat to Wally. 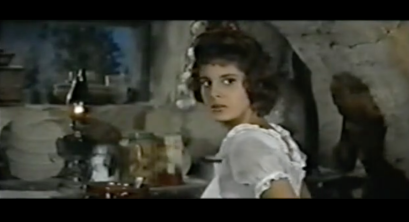 Laura then finds the log book for the boat in a raincoat, and Wally removes the paint on the boat revealing its true name: Islander III. When Costanza comes to the boat to arbitrarily seduce him, he finds out that Moore’s real name is Scott Moorehouse, a name that he recognises. It is then revealed that Scott was a wealthy playboy and WWII medic, who married a missionary’s daughter from Papua New Guinea. It is rather obliquely hinted that the girl may have not been white or that Laura thinks Moore murdered her. Scott’s wife, who started out innocent, became jaded like all the other women in Scott’s social circle, before they set out on the boat headed ostensibly for Italy. But Scott was drunk and sailed into a storm, which caused his wife to be washed overboard and drowned. He understandably blames himself for her death. Laura accuses Moore of not really having changed and trying to replace his dead wife with Costanza, another naïve innocent, and leaves the for the boat distraught when Scott shouts at her. 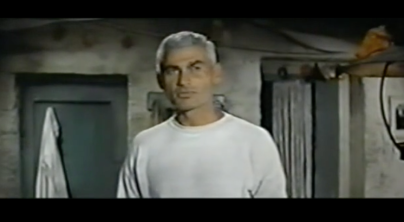 Wally and Laura manage to launch the boat before Wally tells Laura that Moore gave all of his money away to free clinics in the Carolinas. Wally then proposes marriage to Laura who refuses him. Gavino then reappears and starts firing at the island, but Laura had taken Scott’s gun the previous evening (why we don’t know) so he can’t defend himself. Laura dives off the boat to try and help Scott. Wally then takes said gun and gives it to Gavino for Gavino’s rifle. Scott finally goes to confront Govino. Laura tries to stop him, but Costanza encourages him to fight. Urbano explains that Scott must fight for his honour, which Laura rightly thinks is kind of dumb and ludicrous.

Laura then swims back to the the boat and learns that Wally plans to kill Scott if Govino doesn’t manage to. Wally thinks Govino has trapped Scott in a grotto, but the two men then enter in a bare knuckles fight, which culminates in Scott saving Govino from falling to his death into the sea. Govino tries to stab Scott for his trouble, but is disarmed and concedes defeat before returning Scott’s gun. It then turns out that it was Urbano who was removing the signals and sabotaging the boat so that Scott could realise that he should be with Laura and not Costanza. 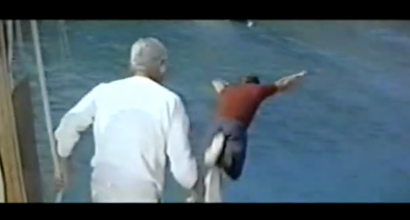 Scott rows to the boat, and Wally tries to shoot him, but cannot reload Govino’s old fashioned rifle. Scott then throws him off the boat, and charters a course for North Carolina after kissing Laura.

There be rocks here

I wasn’t really sure how to start this post. This film seems to have been largely ignored since its release, and therefore not much seems to have been written about it. I chose to write about it for The Box Office Jocks Blogathon because I’d never seen the film, and because I have always liked Esther Williams (she was a favourite of my gran’s) and quite recently discovered Jeff Chandler, thanks to his role in Female on the Beach opposite Joan Crawford, a film which I love. Sadly I did not love this film, which is disappointing because it has two great leads.

This film really should work because it has everything going for it: a beautiful location, good actors and a plot that sounds like it could be good. But that’s just it, the plot isn’t great, and the only two actors in the film who have any chemistry are Esther and Jeff, which should be enough, but isn’t. The year the film came out, The New York Times wrote a pretty scathing review of it, and I’m sad to say, I can’t really disagree, especially with the part where the review says “It looks as if halfway through the shooting of “Raw “Wind in Eden” the producers lost the script and went right on shooting without it, making it up as they went along.” And that’s the thing, the entire film feels kind of unmoored, as if despite Esther and Jeff’s best efforts, they’re swimming around the point just to do the thing (as Urbano says when she asks why Moore and Costanza want to do such a thing). 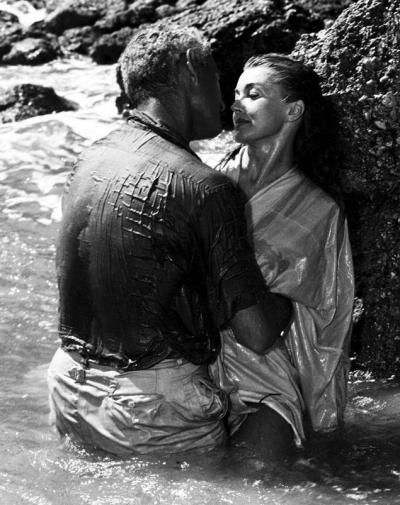 This film could have been a good romantic drama, but the pieces just don’t come together. And while everything looks beautiful, including the island, and the Eastmancolour, and Jeff and Esther; it’s style over substance. Like those beautiful postcards you see of tourist destinations that you’ll never be afford to visit. There’s just no soul. And Rossana Podestà really can’t act. She’s just there to look sexy and sun kissed, which she does, but that’s about it. She and Jeff also have no chemistry, even though they’re supposed to be getting? married? in the spring? Which is super weird because despite Jeff being hot stuff with that gray hair, he looks old enough to be her dad. Which is something that the film actually addresses and then just sort of shrugs its shoulders at. Again: weird. 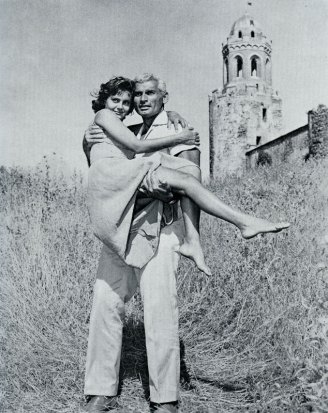 It’s a pity that Esther and Jeff weren’t in another film together, because I think if they’d been given a decent shared vehicle, it would’ve been really something, because despite the subpar quality of this entire film, they really are great together. But unfortunately they can’t salvage a script that doesn’t know where it’s going, and they don’t share enough scenes together to make you really care about their character’s relationship. Sure they end up together, why wouldn’t they, but its really not something you actively root for. Especially when there’s that uncomfortable scene where Moore all but slut shames Laura, and then she accuses him of being a bit of ephebophile and doesn’t want to say that his wife might have been black or that he might have murdered her. I cringed quite hard in both of those scenes.

It’s just all a bit bleh. If you want to see Jeff and Esther together, then cool, give this a go. It’s not unbearable, but it’s not exactly something you should watch if you get distracted or fall asleep easily. Or if you like your plots to be tight and actually make sense. But if you want to see a better film starring Esther rather watch Skirts Ahoy, and The Tattered Dress for Jeff.

This is my second and last contribution for The Box Office Blogathon. You can find my first entry here.

3 thoughts on “A Not So Island Paradise: Esther Williams in Raw Wind In Eden”