As many know, Alfred Hitchcock making Psycho was never a sure thing. The studio, and apparently his wife, weren’t too keen on the Master of Suspense adapting a novel that people thought was cheap sensationalism. Robert Bloch’s book was based on the infamous Ed Gein murders, which had been grisly national news a few years before. Like Norman Bates, Ed Gein had an unhealthy relationship with his mother, who he later dug up and kept in his house as his sole companion. But Hitchcock saw great potential in the story, an opportunity to make an entirely new kind of film, one that, like Val Lewton’s The Leopard Man, explored the darker, terribly lonely and compulsive urges of the serial killer.

But Hitchcock decided that he didn’t want the novel’s antagonist to be balding, fat and middle aged. He wanted him to be the boy next door, young, handsome, agreeable, with a lovely, wide smile and large dark eyes. And so he cast Anthony Perkins, who despite his boyish good looks was already an established film and stage actor, having been nominated for a Golden Globe and two Tony Awards. Anthony apparently reminded Hitchcock of a young Jimmy Stewart, all American and affable, with an endearing goofiness about him. These traits were perfect in masking the urges of a killer who was driven by psycho sexual impulses and borderline incestuous desires.

In the 2012 film Hitchcock, an interview between Anthony and Hitchcock intimates that the director knows of Anthony’s homosexuality, and therefore his suitability to play a character that has to conceal a large part of himself. Whether or not this is true, I am not sure, but the scene also makes mention of the fact that Anthony was very close to his mother as a child and therefore can empathise with a part of Norman Bate’s character. Alma, Hitchcock’s wife and long time collaborator, also says in the film “Anthony Perkins. Imagine the duality he could bring to the role of Norman. The rage lurking behind that little boy grin. The winsome charm he uses to keep from being found out.” She and Hitchcock’s secretary both connect this duality to Anthony’s homosexuality.

Whether or not Anthony Perkins drew on his own experiences as a closeted homosexual living in a time when homosexuality was still illegal, in order to play the role of Norman Bates is unclear, and I also do not want to make potentially harmful or hurtful assumptions. But what is clear, is that Anthony understood the need to be subtle about this duality. There is nothing obvious about Norman’s madness in the film. He seems perfectly agreeable, even likeable. The only scene in which his potential for mental instability is hinted at before the final shocking reveal is the one in which he and Marion talk about his mother, and he utters the famous lines of “A boy’s best friend is his mother” and “We all go a little mad sometimes”. But this also a scene that is better “decoded” with the benefit of hindsight. As a first time viewer, there is something distinctly unsettling in the exchange, but nothing too strange, and that is why the next scene, in which Marion is murdered in the shower is so shocking. And that is also why as a first time viewer, when you hear Norman tearfully demanding what his mother has done, you believe that his mother has committed the murder, and not Norman.

There are those who will claim that they saw the twist coming, but I am hard pressed to believe them. Anthony’s performance is a masterstroke in subtlety. When PI Arbogast comes to investigate Marion’s disappearance at the behest of her sister, Lila, the viewer is firmly led to believe that Norman is not covering up his own crimes, but his mother’s. The way in which he leans over the hotel register is very disconcerting, and you know there is danger in this place, but there is no way of knowing that Norman is the one to eventually dispatch Arbogast.

Norman’s habit of chewing candy corn was “an example of Perkins’ improvisation[51] Another boyish habit that both endears the character to the viewer and also adds to the slight uneasiness that is felt every time Norman is on the screen. Upon subsequent viewings of the film, this becomes a signature of Norman’s dual personality. He is still the childlike young man with a taste for a childhood confection, while also being the morbidly lonely one who has the inescapable urge to kill due to sexual neurosis, caused by an unhealthily dependent relationship with his mother during his formative years. 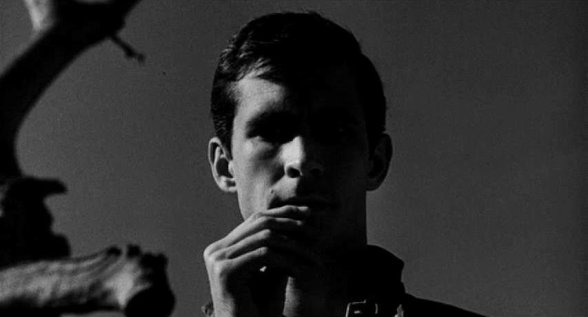 The role of Norman Bates would go onto be the defining role of Anthony’s career, and with good reason. Although he was an incredibly gifted and versatile actor, who gave many fine performances in films such Goodbye Again opposite Ingrid Bergman, Mahogany alongside Diana Ross and Murder on the Orient Express; his portrayal of Norman Bates is one of the best film performances in the history of cinema. The final scene of Psycho, in which the “mother personality” has entirely subsumed Norman,  is a perfect showcase of how Anthony Perkins’ was able to crack and shatter the idea of the innocent, good guy image. His eyes become extremely black, almost pool like under John L. Russell’s lighting, and his mouth stretches not into the winsome grin that Norman has shown the entire film, but something terrible, almost too much for the viewer to look at, but somehow spellbinding in its unnerving capacity.

17 thoughts on “The Boyish Killer: Anthony Perkins’ Performance in Psycho”