Double Indemnity (1944) starring Barbara Stanwyck and Fred MacMurray as Phyllis Dietrichsen and Walter Neff respectively, is considered a landmark film noir, and one of the best films to ever be made in the genre. It tells the age old tale of money and sexual control, expertly exploring the seedier side of both. While modern audiences will instantly connect both Barbara Stanwyck and Fred MacMurray to these roles, neither of them were too keen to play the murderous wife and heel of an insurance salesman. Billy Wilder hounded both of them until they took the part. While Barbara Stanwcyk was the always the first choice for Phyllis, Fred MacMurray was pretty much the last one for Neff. 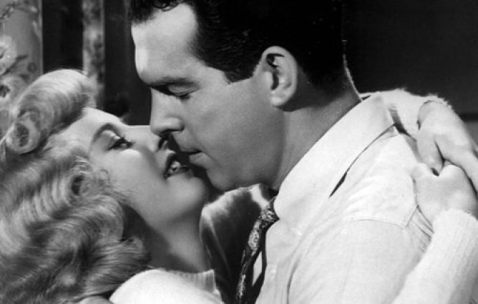 According to Alan Ladd Jr, his father was the first actor to be approached to play the part, but turned it down because it was a small picture and Alan was the biggest star on the Paramount lot. While this may be true, I think that perhaps the fact that by this point Alan was almost exclusively playing the tortured hero in film noir, rather than the biggest heel around, as he had done in the comic noir Lucky Jordon, might have had more to do with it. Paramount only allowed MacMurray to play Neff as a means to punish him for a supposed folly in being worn down by Wilder and agreeing to take the part. And while MacMurray was also a big star by 1944, he hadn’t quite reached the astronomical zenith than Alan had, and so it’s quite likely that Paramount told Alan to forget about it. And Alan was not one to habitually argue with the studio. He would later be suspended over issues over pay, but that didn’t last long. There were also a number of pictures that were announced as being vehicles for him which eventually went to other actors for various reasons. 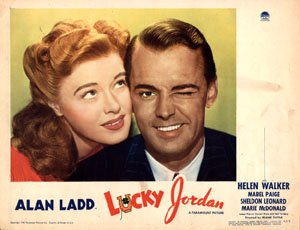 Thankfully, even at the zenith of his career, like Joseph Cotton and Richard Widmark, Alan was no stranger to radio. He had made his living in the medium in the decade before he was discovered by his agent and then wife, Sue Carol. Alan would play the part of Walter Neff in the Hollywood Star Time production of Double Indemnity opposite the “First Lady of Radio”, Lurene Tuttle. Like The Screen Guild Theatre and Lux Radio, as well as Suspense and Screen Director’s Playhouse, Hollywood Star Time boasted premier stars in its broadcasts. The first episode, which premiered on the 6th of January, 1946, starred Tyrone Power and Jeanne Crain in an adaptation of Seventh Heaven, which had originally starred James Stewart and Simone Simon. It was, therefore, a premium radio show that boasted a fine production, and their adaptation of Double Indemnity shows that.

Neff with a difference

While MacMurray’s rendering of the part of Walter Neff is masterful, with his almost bored and very arrogant approach, Alan chooses to approach the role in quite a different manner. The adaptation for radio is understandably much condensed to only half an hour, and so the sexually charged, iconic meeting between Phyllis and Walter is not included in this version. The action starts from when Walter is on the train pretending to be Dietrichsen, who he had already murdered by breaking his neck on the way to the train station, with Phyllis at the wheel of the car. Alan shows his talent for expressing real inflection and emotion through his voice when Walter reflects on how it felt to murder a man. He sounds thoughtful, almost as if he’s talking about something interesting that he read in a book, but there is an underlying current of disbelief, as if someone else murdered the other man. And this monologue is only a few minutes long, but Alan manages to make us understand so much about the character’s inner thought processes and feelings about the path he is set upon.

The relationship between Phyllis and Walter is also portrayed differently because of Alan and Lurene’s performances. Whereas MacMurray’s Walter seems to quickly tire of Phyllis, Alan’s Walter seems truly invested in the relationship, sounding almost desperate at the thought of Phyllis being hung for the murder of her husband. There’s also more tenderness between them in this radio adaptation, as if they are brought together not only by sex and insurance fraud, as in the feature film, but by a real desire for one another. The sense of loneliness that is present in the film is ramped up in this version, with Walter and Phyllis acting as touchstones for each other, which is heightened because we can only hear their voices. It’s as if that’s all Alan and Lurene become, voices in a void, reaching out for each other. 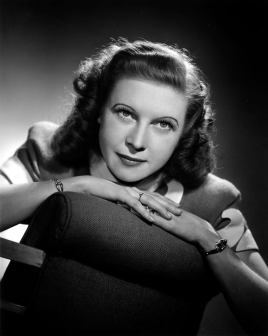 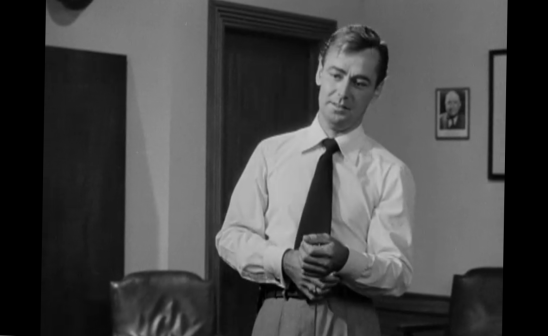 Interestingly, the voice actor who plays Keyes sounds almost exactly like Edward G. Robinson, and he and Alan play off each other extremely well in their “scenes” together. When Walter begins to crack, and Alan’s voice becomes that of a deeply suspicious, deeply desperate man, cracking on some words, this Keyes talks him down, almost as if he’s addressing a child, which reinforces the uneven power dynamic displayed between the two men in the film.

The ending of the radio play is slightly different from the film. Because this is radio, there is no need to “justify” Walter’s voice over, and so the recording of his voice on a dictaphone is forgone. And instead of there being some ambiguity about Walter’s fate as in the film, Walter dies very soon after Phyllis, in her house. Alan does a superb job of making Walter’s death subtle, quiet, almost without the audience realising that he’s gone, until Keyes says “Got a match, Walter?” and when he gets no reply, he says, “Walter… I’m sorry. So sorry.”

All in all, while I think MacMurray was perfectly cast as Walter Neff, I’m so glad that I got to listen to Alan portray that character. I think that if he had been in the film, Walter would’ve been less of a heel and more of a tortured man.

You can listen to the radio play here, and tell me what you think.

This post is part of my ongoing series dedicated to Alan, entitled Adventures in Alan Ladd.

11 thoughts on “A Different Portrayal of the Ultimate Betrayal”