His Girl Friday (1940) is a stone cold screwball comedy classic, starring two juggernauts of the genre: Cary Grant and Rosalind Russell. This film is up there with such masterpieces as It Happened One Night and Midnight, among many others in this golden echelon of the Golden Age. It has all the wonderful hallmarks of the genre, which include an utterly ridiculous plot, breakneck speed, whip-smart dialogue and fabulous chemistry between its two leads. But the film also explores some very serious topics such as the societal roles of women, most importantly the infuriating fact that women are expected to choose between their career and a family, political corruption, the lack of empathy of the press, and the indifference of human beings in general, shown so well through the relationship between convicted killer, Earl Williams, and veiled prostitute, Mollie Malloy.

I will only give a brief summary of the plot, because while it is essentially simple, it becomes more complicated by the many turns that Hildy Johnson (played by Rosalind Russell) is subjected to by her ex husband, Walter Burns (played by Cary Grant). Much to Walter’s chagrin, Hildy, his ex-wife, and now ex-ace reporter, is going to marry straight down the line insurance salesman, Bruce (played by Ralph Bellamy). He makes sure that he derails her plans to leave town and marry Bruce in Albany, by pretending that the journalist already assigned to covering the Earl Williams story is unavailable (Walter has in fact sent him on a six week holiday). Even though Hildy is reluctant to cover the story, she eventually agrees when Walter buys a large policy from Bruce, but becomes more and more involved as her innate love for getting the story and also her individual empathy in comparison to the apathy of the other “newspaper men”.

This film is a classic because of its exceptional script, which is a vast improvement on the original adaptation of the stage play, The Front Page, made a decade earlier. Thanks to Howard Hawk’s direction and the incredible talent of its cast, especially Rosalind and Cary, the film does not slow down for a moment. To think that much of the film is improvised, either in dialogue or action, is an absolute wonder. This is probably what makes the film feel so natural and hilarious, the cast really becomes utterly involved in the film and live their characters. The best example of this, of course, is Hildy and Walter’s first interaction after an extended absence by Hildy. Rosalind and Cary play off of each other so spectacularly that it is like watching the battle of the sexes tennis match between Billie Jean King and Bobby Riggs. In this one scene, the dialogue, the spontaneity of reaction and action, and the delivery of that spectacular dialogue mean that the audience are told the entire backstory of Hildy and Walter without it being utterly contrived.

It is strange to think that Rosalind Russell was the ninth choice for the role, with Carole Lombard and Katherine Hepburn, unsurprisingly with their veteran screwball chops, being the first choices. And while these two megastars of the genre would have both been admirable in the role, Rosalind brings something to the role that no one else can. I’ve always loved the way that Rosalind delivered her dialogue. In my opinion, she was one of the reigning queens of fast paced dialogue, as evidenced by this film and The Women. She is utterly believable as the incredibly clever, talented and tough newspaper “man”, who is also vulnerable and empathetic. She manages to combine the sometimes contentious parts of her character to perfection. While Hildy is empathetic to both Earl and Mollie’s stories, and is the only reporter who listens to a desperate Mollie who has been mocked and jeered by the press, probably due to the supposed incongruity of her profession and her kindness towards Earl. Hildy is also guilty of wanting the scoop, she goes along with Walter’s ridiculous, and often rather unscrupulous, methods, although she is his conscience and doesn’t buy his stories, which go from the ridiculous to the sublime. 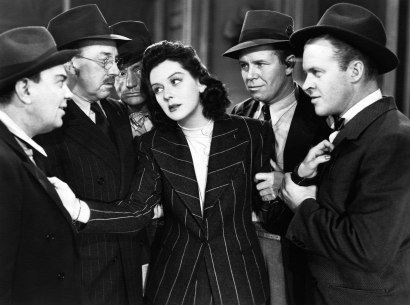 Cary is also a natural in his role. Like Rosalind, he had an incredible talent for flawlessly delivering fast paced, wisecracking dialogue whilst using facial expressions and his entire body. Rosalind purportedly felt that Walter had better dialogue that Hildy, despite her being the main character, and hired a ghost writer to improve her dialogue. Cary responded to this amusedly by asking Rosalind each morning, “So what have you got today?” Cary also matched this with brilliant ad-libbing, such as his lines about Bruce looking like Ralph Bellamy, and him getting his own back with Archie Leach. This makes them an utter dream team. I cannot imagine the film working as exceptionally as it does without either of them. Their chemistry leaps off the screen. It should be too much, and it is, but that’s what makes it work. Neither of them overwhelms the other. As Howard Hawks’ envisioned sentences overlapping and completing one another, that is what Cary and Rosalind’s performances do. It’s impossible to see the seems as they passionately argue, hilariously verbally spar and eventually inevitably reunite. 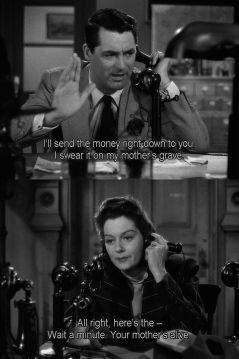 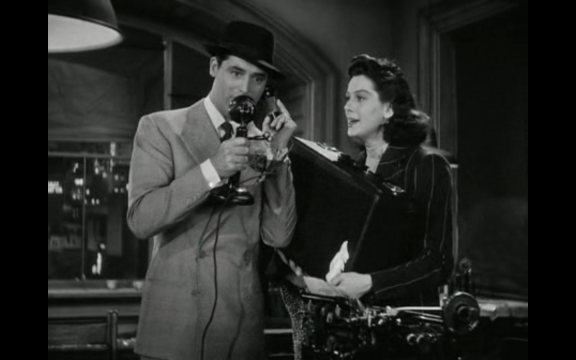 Disappointingly the film and Rosalind’s performance were not nominated for any awards. But its legacy, and the legacy of she and Cary’s performances have lived on for seventy years, and have been recognised by the AFI and the Library of Congress. His Girl Friday has been instrumental in defining a genre. It is the perfect representation of a genre that has so many layers, with characters that you’ll never forget. I mean, how could anyone ever forget Hildy Johnson, a woman who is recognised as equal, and even superior, to any man in her field. 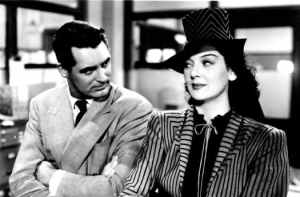 This is my scoop for The Rosalind Russell Blogathon being hosted by chief editor, In The Good Old Days of Classic Hollywood. Please visit her column to read everyone’s bylines and for more developments.