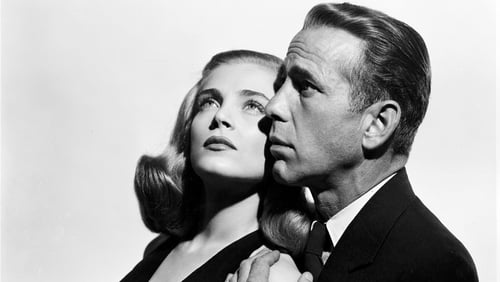 When I first watched Dead Reckoning (1947), I hadn’t the faintest idea what it was about or who was in it. When I saw Bogie’s name appear on the screen I thought “Well now we’re in for a treat”. I had no idea who Lizabeth Scott was either. I’m glad that I know now. 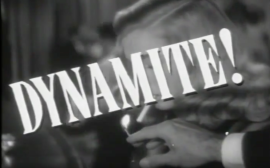 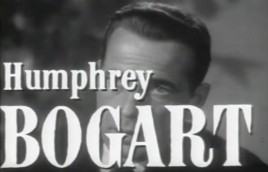 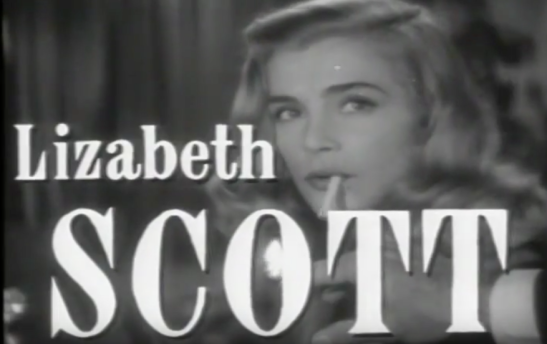 As the film began I thought that it was a war propaganda movie. I’ve seen quite a few, and I’m not a big fan. But I was as pleased as could be that it became very clear very quickly that this was a solid noir, bathed in pitch black shadow and overlaid with Bogart’s expert narration. He delivers all of his lines as if he really just thought them up, totally natural and saturated in his wonderful deadpan wit. 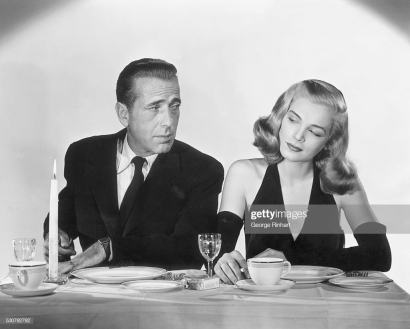 But it’s not just Bogart who makes this film a great noir, maybe not quite in the league of The Big Sleep, but definitely a credit to the genre. It’s Bogart and Scott’s chemistry, and her electric performance, all sex and femme fatale vulnerability that elevates everything. The moment they meet you know that this it, that this will be a real zinger. It immediately struck me how similar Scott was to Bacall, and how easily she and Bogart play off of each other. While Bacall and Bogart are a legendary noir couple (yes calm down, put away the gun), Bogart and Scott really are something. 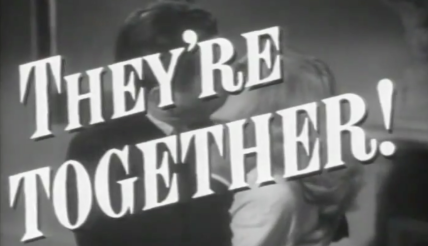 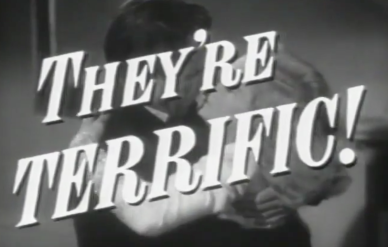 Scott slowly but methodically unravels the tough guy person that Bogart’s character builds up, his anti-woman stance, a staple of the genre, and gets under his skin until he’s so mad for her that he can’t even really admit to himself how many masks she wears. Scott makes her character so multifaceted, uses the enigma that the script makes her so well, that you never truly know who she is or what she’s seen. It’s fitting that the last time we see her, her head is swathed in bandages, just her face showing. That lovely face,  its true owner unknown. 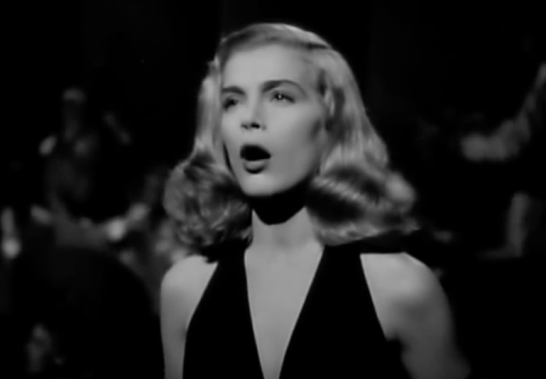 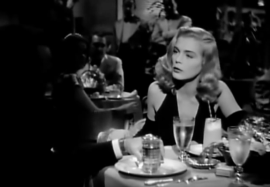 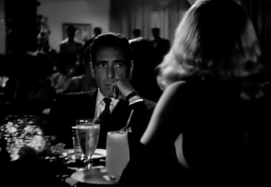 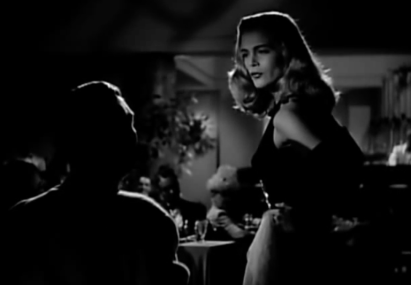 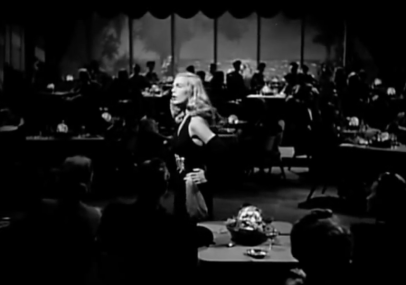 Scott’s song, “Either it’s real or It Isn’t”, is one of the highlights of the film

The story starts with Bogart’s character Captain Rip Murdock, evading the police and slipping into a grand Catholic church. There he begins to tell his story to Father Logan (played by character actor James Bell), a priest well known for his bravery in the parachuting corp during the war. Rip was very close friends with Sergeant Johnny Drake (played by William Prince). Both men have served with honour and bravery in the parachuting division, and are to receive commendations in Washington, but when Johnny finds this out, he hops the train they’re on and Rip never sees him again. 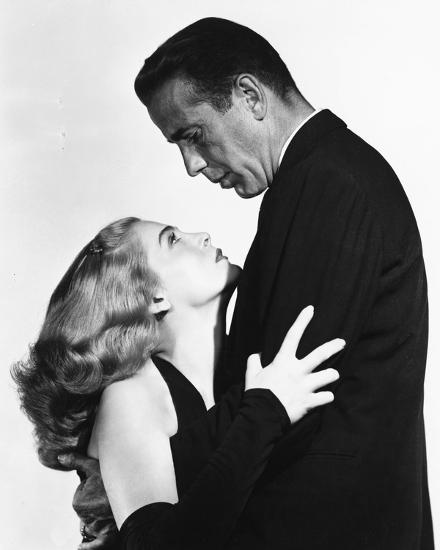 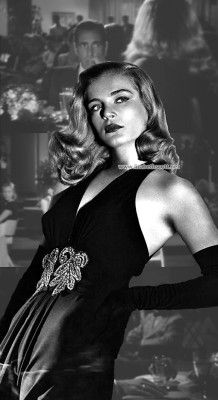 Rip’s spidey scenes immediately tingle, and he gets permission from a senior officer to dig into Johnny’s past and hopefully find his MIA friend. Rip’s search for Johnny leads him into the criminal underworld, where a gangster Martinelli (played by resident baddie Morris Carnovsky) and his deranged associate Krause (played by Marvin Miller) dwell. He also meets Johnny’s old flame, who keeps saying she’s still his girl, Mrs Coral “Dusty” Chandler (played by Lizabeth Scott). Where is Johnny? Does and did Dusty ever really love him? And how the heck is Rip going to get out of this untorn (sorry I couldn’t resist). 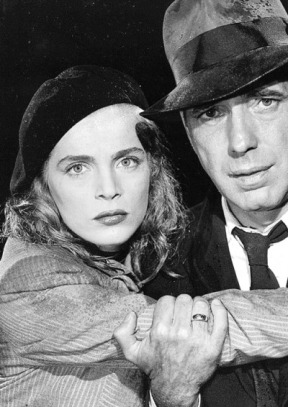 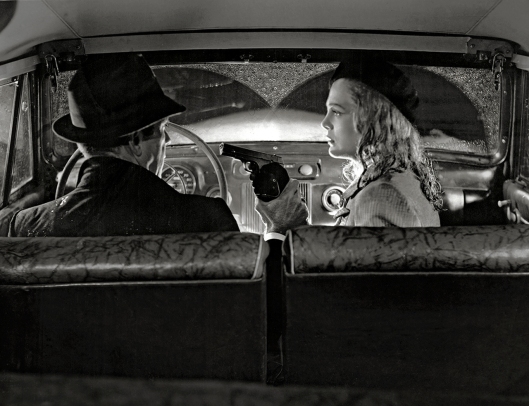 What makes Dead Reckoning work primarily, as I’ve said, is Bogart and Scott, but it’s also the atmosphere, the way that the story plays out. Much of the film is shown in flashback, enhances its noir credentials, with Bogart’s drawling, cynical, but always insightful narration. The performance of the supporting characters also strengthens the film, and they do much to fill out characters that are often not given much of a back story or not given one at all. The film also gets away with a surprising amount of violence, from Krause’s manic beating of Rip, to the finale, which ends in an eruption of violence and betrayal. 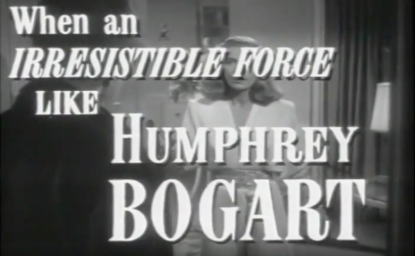 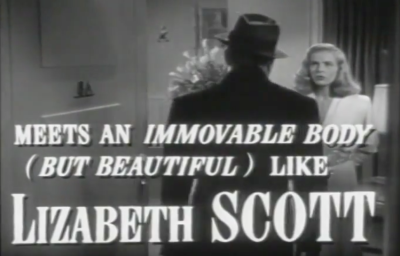 Overall, this film is much better than it has a right to be. The plot is nothing revelatory, and the characters are ones that you’ll be familiar with from the noir genre: a worldweary lead, a femme fatale with hurt eyes, a slimy gangster and a heartbreaking ending. But it’s the actors that make it all worthwhile, from Bogie’s clever little asides, to Scott’s song about wanting and needing someone to distraction, and the ending, the image of a parachuter drifting downwards through the clouds. Will he make it? Will he pull the cord in time? Or will the ground come fast and hard and end it all? Will he have his dead reckoning? 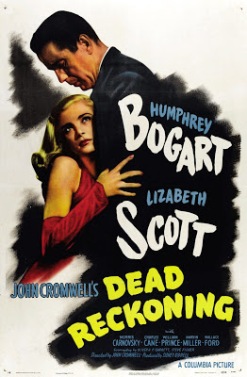 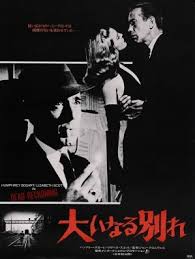 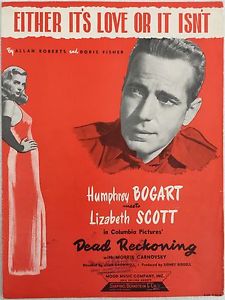 This is my first contribution for The Noirathon being hosted by the divine Maddy. Please go and investigate her blog, don’t forget your trilby and cynicism, to read everyone’s offerings in the shadows. 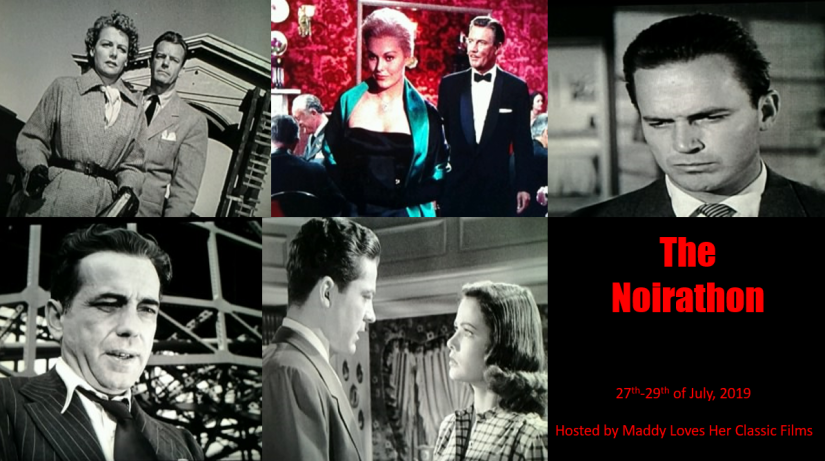