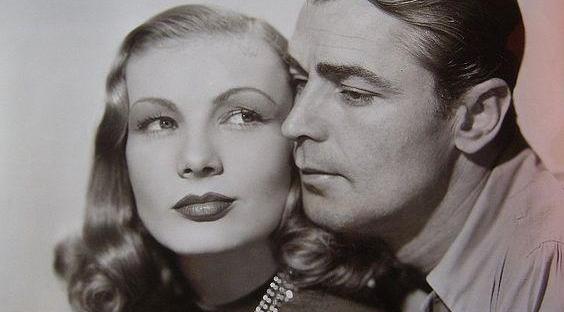 As Classic Film Fans we often talk about the stars of classic cinema being great in the singular, as in Joan Crawford was spectacular or Myrna Loy’s capacity for shade was untouchable. But what we often don’t talk about is how fantastic it was when two classic film stars came together and made the perfect pairing. There are scores of examples from Loy and Powell to Crawford and Gable. In the film noir genre, the pair that is held up as the pinnacle of noir is Bogart and Bacall. And while I am not here to dispute that, as The Big Sleep is made irresistible by their onscreen pairing, as well as their real life partnership, I am here to bring your attention to a noir pairing that I think was as captivating and defining for the genre: Alan Ladd and Veronica Lake. 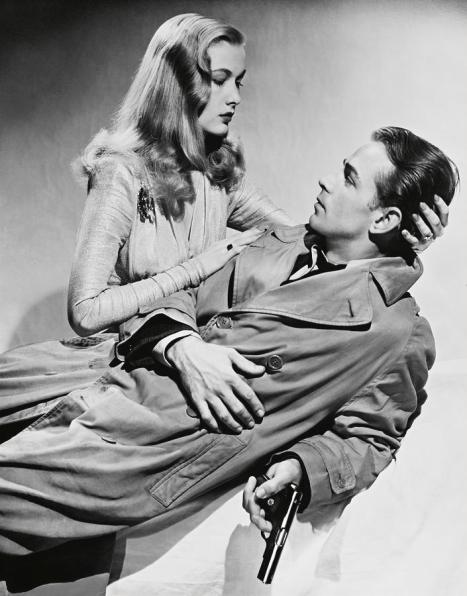 Why is it? You’ve never seen me before tonight.

Every guy’s seen you before somewhere. The trick is to find you.

Lake and Ladd made four film noirs together, and all of them were major financial successes, whilst three are considered to be defining films in the genre, the most famous being The Blue Dahlia (1946). In their first film together, This Gun for Hire (1942), Veronica and Alan were not the film’s major romantic pairing, as Veronica and Robert Preston, who would become a lifelong friend of Alan’s, were. But Paramount very quickly realised that it was not Veronica and Robert that audiences had been drawn to, but Veronica and Alan. Their chemistry is so powerful, especially in the scene when Alan saves Veronica in Laird Cregar’s house, that the ending of the film, when Veronica and Robert embrace, it’s almost jarring. You’ve spent so much time wanting Alan and Veronica to be together that you’ve forgotten about she and Robert. 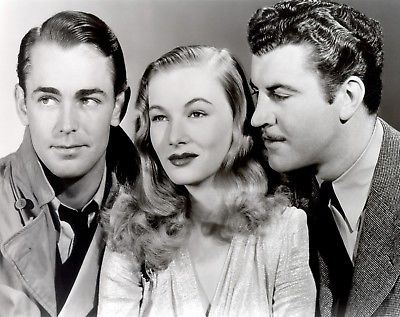 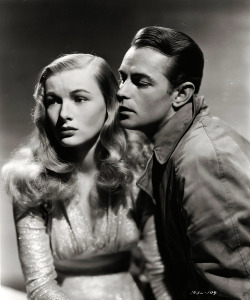 But what made them so compelling? How did they, along with Bogie and Bacall, become probably the greatest and most memorable film noir couple of the golden age of the genre? Many people cite that Paramount paired them because they were both of slight stature, Alan being five foot seven and Veronica around the five foot mark. And while that was perhaps an initial motive, as they looked so good together onscreen from a physical perspective, there was definitely something more as they made their films together. According to Veronica:

Alan Ladd was a marvelous person in his simplicity. In so many ways we were kindred spirits. We both were professionally conceived through Hollywood’s search for box office and the types to insure the box office. And we were both little people. Alan wasn’t as short as most people believe. It was true that in certain films Alan would climb a small platform or the girl worked in a slit trench. We had no such problems together. 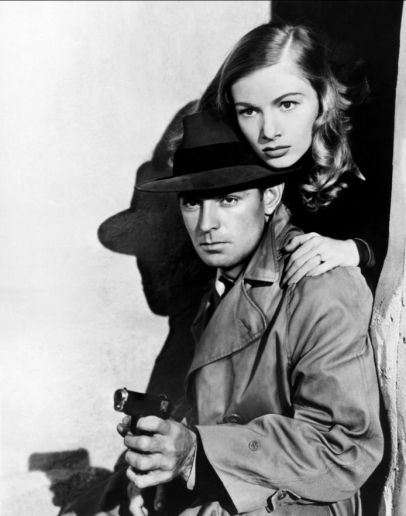 As Veronica explains, she and Alan understood each other, probably in a way that neither star’s past or future co-stars would. Pictures of them onset during filming of their pictures shows their easy bond and natural friendship. My favourite set picture of them is the two of them sitting in their fold out chairs and discussing the script. They look completely engrossed in each other. Their teamwork is made entirely clear, their understanding of how they were better together than trying to show each other up. 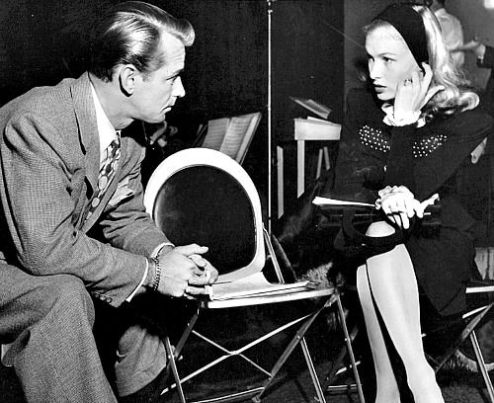 What I’ve always been struck by in their films is the perfect balance of their emotional interactions. Alan’s noir persona is one of mystery and intense masculinity, but with a definite edge of vulnerability and boyishness. Veronica’s worldly, and definitely weary, sexiness, brings all of this out in Alan without any sort of affectation. When they show such raw emotion with each other as in Saigon or The Glass Key, it doesn’t look as it’s rehearsed. They really appear to be feeling that way. The Glass Key and Saigon are notable for the very apparent hostility that Lake and Ladd’s character’s present to each other.

In The Glass Key,  Veronica accuses Alan of being complicit in murder, and he almost has her arrested for it in turn, whilst in Saigon, he blackmails her and she lets him have the full wrath of her acid tongue. Neither of them are worried about looking pretty with one another. In all the films I’ve seen of Alan’s, his films with Veronica seem to be the most emotionally real. You can see that they are entirely comfortable with each other, happy to show warts and all. 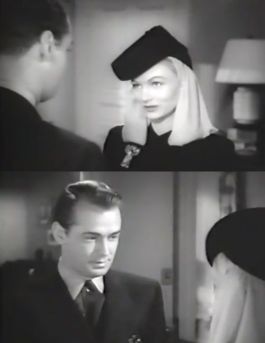 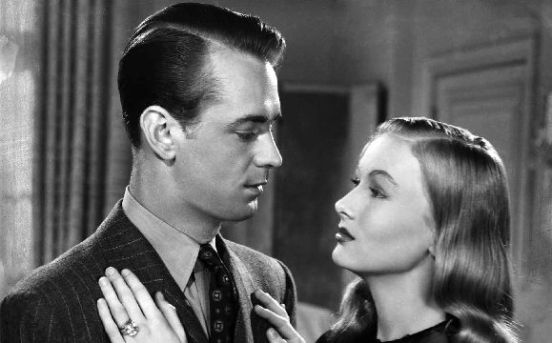 Their intense sexual connection is another thing that makes their onscreen pairing so powerful. They are always equals in their attraction for each other. They give as good as they get. Their is little need for dialogue when they convey their emotions so succinctly when they look at each other. Alan show’s Raven’s incredible desire for Veronica’s Ellen when he pulls her up from the bed, his face inches from hers, his hands resting on either side of her waist, just under her breasts. 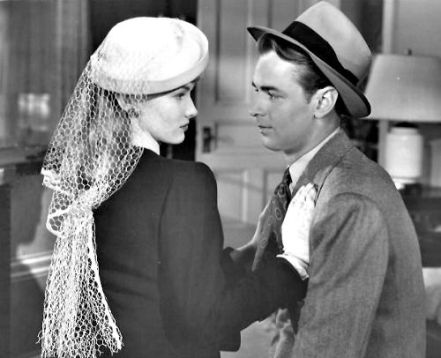 Her face after he kisses her slowly and tenderly in Saigon is filled with longing and hurt, as is his when he believes she has betrayed him in The Blue Dahlia. In the The Glass Key, her face is soft before she kisses him, and his hands flex against her, unable to resist even though his best friend is in love with her and has proposed marriage. Their similar stature may have been an asset, but it is the way that their bodies fit together, the manner in which they understand one another’s unspoken thoughts that draws the audience in and keeps them there, waiting to see how they will come together again.

Their timing for dialogue is also incredibly effective. When she and Alan argue in Saigon, her tone and the way that he cuts her off or she shouts over him is not soapy melodrama, but shocking, because it seems so real. And it is in sharp contrast to the low, bitter tones and hopeful whispers of The Blue Dahlia, but it does play into Alan’s spitting out “baby” at her with such bitterness when he believes himself to be sold out by his potential lover. What they mastered in their exchanges was the capacity to combine dialogue and movement so well. When she pursues him in The Glass Key, it’s not only his words that make it clear that he wants but can’t touch, but also the way he angles himself away from her, trying to escape her touch. But she is insistent, both in words and action, but most importantly the latter, with her hands moving down his arms and across his back, slowly taking him under her femme fatale control.

Sometimes you watch a film and you can see how hard two actors are trying to make it work, to make it natural and sexy. I won’t give any examples, but I’m pretty sure you’ve just thought of a few of your own. But with Alan and Veronica it always clicked, whether they were playing people brought together by chance on a train, or by a web of murder and betrayal, or even the mutual desire to protect someone vulnerable; the magic never ceased.

It was always there, filling up the screen, making it so that you cannot, and do not want to, look away. There are images that become ingrained in your mind throughout your life, and Alan’s hand in her golden hair, and the curve of their faces as they slowly meet, are some that have become ingrained in mine. 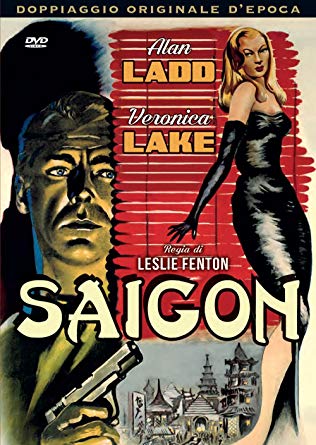 This is my second and final contribution for the lovely Maddy’s celebration of shadows, The Noirathon. Please do find your way through wet back alleys and side streets to her blog, where Bogart, Mitchum and all those dark figures await.

6 thoughts on “Lake and Ladd: The Perfect Pair”