This post contains spoilers and graphic content. Please be advised that you may turn into a fly humanoid after reading this. You’ve been warned.

Man’s tendency to act like a god and try to control and obliterate nature’s tenets has been explored many times, most famously in Mary Shelley’s Frankenstein. What Shelley explored and taught her readers, and has taught them for the last century is this: man cannot be a god. Look what happened to Prometheus, and look what happens to André Delambre and Seth Brundle in The Fly (1958) and (1986). 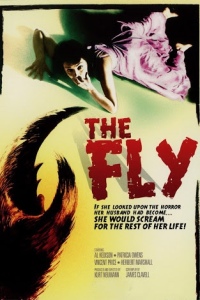 The original film featured an impressive cast, with future James Bond Felix, David Hedison, in the lead role of André, legendary scream queen Patricia Owens as his wife, Vincent Price as André’s brother and Herbert Marshall as the police detective investigating André’s mysterious murder. Although the film was conceptualised as a B movie, more care and a more prestigious release were afforded the film by Fox. 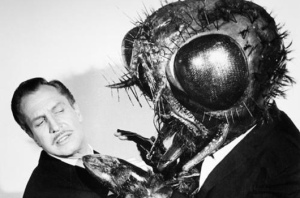 This would be a good move, as the film was a major commercial success and meant that Price’s career in the horror genre would become solidified. The end scene would also become very well known and be nominated by the AFI as part of their 100 Years…100 Movie Quotes list. 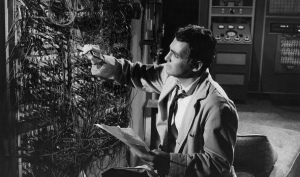 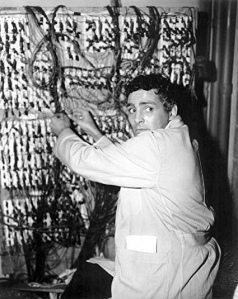 In the film, André is an extremely wealthy partner in the family electronics business. His lack of clear career ambition and extreme intelligence seemingly lead him to delve into one of science fiction’s greatest staples: teleportation. He works alone, in his laboratory in the basement. The only person who is in his confidence is his adoring wife. This seeming hubris, this desire to have glory alone, leads to disastrous consequences. Although André is a likeable character, he is innately flawed in his inability to recognise his own inexperience in what he is undertaking. His wife begs him to seek help from other scientists when his experiment fails so terribly, but he will not take her counsel nor consider that he does not have the answers to everything. 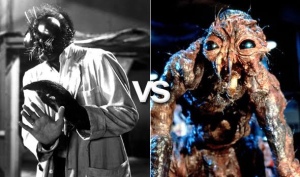 A similar problem befalls Seth Brundle thirty years later, when he does not take his girlfriend, Ronnie’s, advice to do things slowly. When he allows human error, motivated by toxic masculinity, to doom him to an utterly terrible fate. He decides to use himself as a human subject for his experiment in an utterly premature manner because he feels threatened by another posturing male, and betrayed by a woman who he cannot trust because he lacks the emotional maturity to. 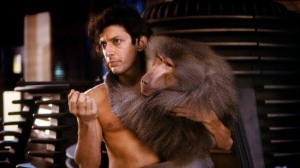 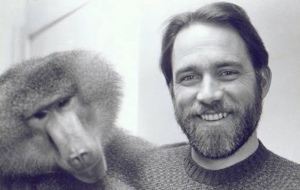 Cronenberg’s The Fly follows a startlingly similar pattern to that of Shelley’s Frankenstein, with the most similar one being that of a doomed bride. But instead of creating a separate monster, Brundle becomes one, and almost murders his own “perfect” woman. Although like Victor Frankenstein, the perfect woman is a fantasy of his own mind. In The Fly the creator and monster merge, and seek to destroy the fantasy made flesh. 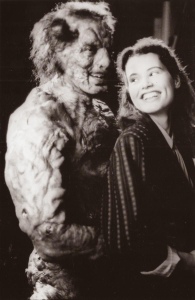 Man’s inability to admit his own primal urges and deadly impulses, is apparent in Seth. As he becomes less connected to human societal norms and rules, he loses all sense of what is moral, until in the end he deforms his “rival” and seeks to murder his lover and their child, who may or may not be a genetic monster already.

Cronenberg’s direction is incredible. While many have described him as “cold”, especially in relation to his adaptation of The Dead Zone, and his sci fi classics, Videodrome and Scanners, that extremely precise style is to this film’s benefit. We as the audience feel like Dr Frankenstein, too. We care for Seth, want him to succeed, but when he becomes so horrifically mutated and deadly, our sensibilities are offended because we are still ruled by society’s moral tenets. We also identify with the very real and emotive Ronnie, who breaks through the cold scientific atmosphere of the plot’s motivations and is our point of relation. Davis’ performance is exceptional, especially because it still retains such wonderful reality in a film that is so surreal. 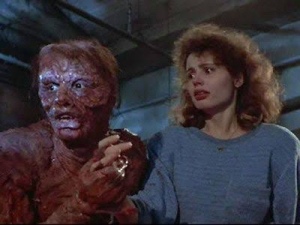 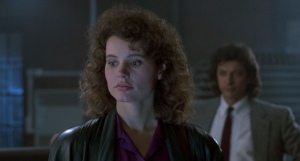 The incredible make up that is so vital to the Seth’s physical transformation was designed and executed by Chris Walas, who would win a well deserved Oscar for the monstrous thing that is Brundlefly. Seth’s outward appearance, the seemingly cancerous skin discolouration, shows the decay of his mental state, until the fly, both like the insect but also utterly removed from all natural genomes, bursts from its last vestiges of humanity, and Seth is truly dead. Although, some part of him still survives in the end, when Ronnie kills him at his bequest. 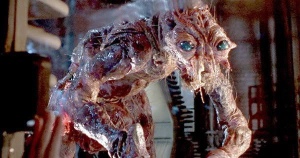 All these incredible elements are intensified and made complete by its central actor, Jeff Goldblum, and his brilliant performance. 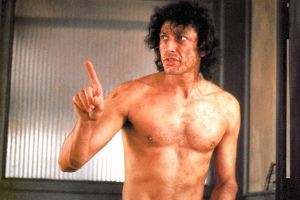 It’s through his eyes that he shows much of Seth’s character, from his eagerness to please Ronnie to the terrible pain he feels in the end, before he is no longer really Seth, his sense of humour petering out into fatalism.

Goldblum’s seemingly infinite capacity, right until the end, even when he proposes to do the unspeakable and maims his “rival”, to make Seth relatable, is truly something to behold. I cannot think of any other actor of the period that could have achieved what Goldblum does. I firmly believe that he should have been nominated for an Oscar for his performance, as he gives a performance that rivals and actually surpasses many other straight up drama films that the Academy so favours. 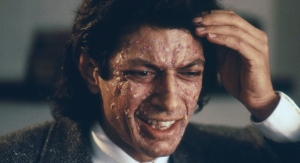 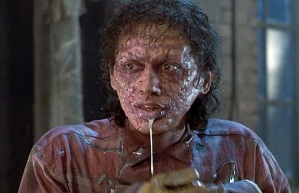 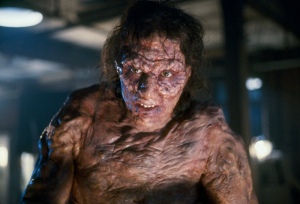 Like Kafka’s central character in The Metamorphosis, Seth becomes unpalatable to The the outside world. He is acceptable when he is seemingly doing work that will benefit others, but when he can no longer “serve” that purpose, he is cast aside with little pity. This is most obvious in Borans’ proposed action of “putting him down” like a sick animal at the end of the film. It is only Ronnie who cannot abandon him. Even in the end, she still loves him and wants to save him. 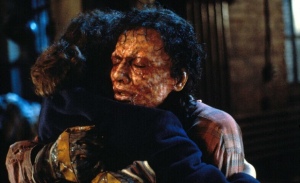 But without Goldblum’s performance, none of this would be even vaguely obvious. What would such an existential story be without an actor who can make Seth wholly human, even when he is becoming something so inhuman. Because of Goldblum’s goofy smile, his pained recognition of defeat, his physical brilliance in the role, we hope that it is all a dream. That a man dreamt he was an insect and hated it. 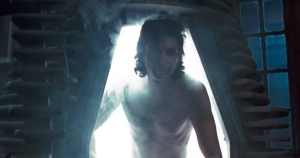 But it isn’t so. Seth becomes more terrible in the end than anything we could have dreamed. And like Ronnie, we mourn the man we knew before. The awkward, silly, sweet man of the beginning of the film, who wore five identical suits, because Goldblum makes it so. Because he becomes Seth, and is not afraid to be him all the way. It isn’t just Seth who becomes the fly, it’s Goldblum who undergoes a triple transformation, leaving the audience gasping at the end. Wishing to no avail. 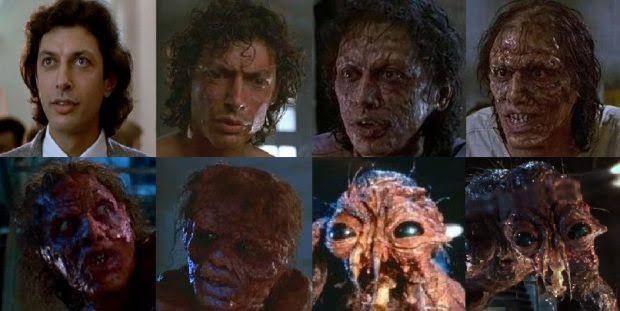 He must go,” cried Gregor’s sister, “that’s the only solution, Father. You must just try to get rid of the idea that this is Gregor. The fact that we’ve believed it for so long is the root of all our trouble.

This is my contribution for The Jeff Goldblum Blogathon being hosted by Realweegiemidget Movie Reviews and Emma K Wall. Please visit their blogs for more Goldblum dust. 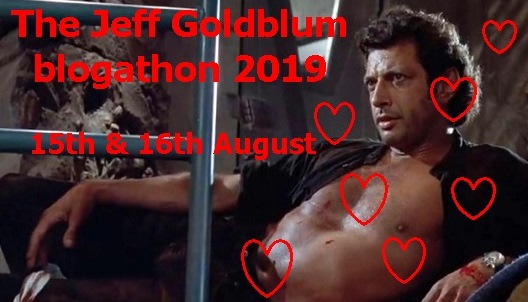