Mrs Miniver (1942) was one of the many films my grandmother took my mother and her brother to see when they were children. In those days, little independent theatres still showed classic films regularly.

I wonder how my grandmother felt watching the film in that little darkened cinema, her two small children beside her. She had lived through the war. She had been a teenager with gentle curled hair and no real stockings because of rations. Her father had served in West Africa. And although he returned alive and well, with a few souvenirs, he never spoke much about his experiences, which was understandable. As conditions where he served were some of the toughest.

When I watch Mrs Miniver, I think of all the families that lived through that time, as the filmmakers wanted their audience to. I think of British families like the Minivers, and American, and even German ones, because the film does not portray Germans as soulless monsters as some others of the time did. The scene in which Mrs Miniver is held at gunpoint by that German pilot is one filled with so many different things.

He is but a boy, not much older than Mrs Miniver’s own son, Vin, who is also serving in the war as a pilot. The way the German boy chokes on bread, ham and milk, starving after hiding for days from the British authorities, suffering from blood loss, is heartbreaking. As is when he tells Mrs Miniver how the German forces will destroy Britain as they did so many others. But they are hollow, terrible words uttered by a boy who has been brainwashed to serve a terrible power. And when the police take him away, Mrs Miniver is left with the trauma of hearing a youth poisoned.

Mrs Miniver has been described as a propaganda film. Largely due to its portrayal of pre-War idyllic England and the seeming perfection of its main characters, as well as its complete focus on a British family. And while there is some merit to that argument, as the pre-war village of Belham is perhaps too picturesque with its white picket fences, and the Minivers are decidedly upper middle, than strictly middle, class; I do not feel that these things detract from the film. Audiences of the time, and audiences now, wanted and want to see an England that was beautiful, unscarred by the terrors of war before the film shows so many things destroyed, so many lives lost and gone, a whole generation dead on battlefields and in wartime raids.

Greer Garson won an Academy Award for her portrayal of the titular character, and quite rightly so. Her acceptance speech is now legendary for its sweetness and sincerity, her acknowledgement of how America had welcomed her as its own in a relatively brief time. Her performance as Mrs Miniver is, in my opinion, the best of her career. I have never seen a film in which I do not love her, particularly in Random Harvest, but as Kay Miniver she is so many things that I admire and adore. She is vain and silly in her own way, beautiful of face and spirit, brave and forgiving, fiercely protective of her children and loyal to her country. She is above all a woman, one trying to survive in a world that she does not recognise. She would have lived through the First World War, and the memory of that war resonates throughout the early part of the film; but this war is a different kind, and Mrs Miniver must survive all things it brings.

Greer Garson’s expressions are so natural and unaffected. Her look of delight at the prospect of the happiness of her son and his love, Carol, played by the lovely Teresa Wright. Her suppressed fear for her son when he joins active service, her hope that he will live. As Lady Beldon, played by the exceptional Dame May Witty observes, Mrs Miniver has the most extraordinary way of looking at people, and this is so true of both Greer Garson and the character. Something shines out of her large eyes. All the pain of the present and hope for the future, all the memories of then and now.

The entire cast is brilliant. I cannot think of one actor who is miscast or gives a false performance. Walter Pidgeon is wonderfully witty as Clem Miniver. My favourite line of his, in response to finding out the gentle old station master, Mr Ballard, has named a rose after his wife, is, “You left the light in the dressing room on tonight”. If you’ve seen the film, you’ll know the hilarious manner in which he delivers said line. And although he is the only American character in the film, he does not seem out of place at all. He is a father trying to do his best for his family. And although he is too old for active service, his response to the call for help at Dunkirk is answered with utter bravery and willingness. The scene in which he and thousands of other men who own small boats are addressed by a large Navy vessel is one of the most brilliant sequences of the film. Filled with only the voice of the officer addressing them from somewhere on that ship, the men’s faces fixed into expressions of determination, barely suppressed fear and amazement, never fails to bring goosebumps to my flesh and tears to my eyes in how powerful it is. In how it shows that the war was fought, and would eventually be won, by the bravery of civilians and soldiers alike. 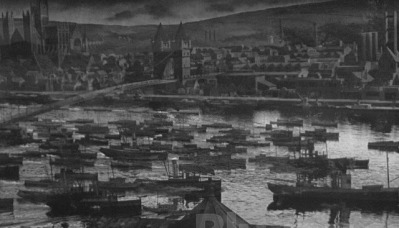 For almost the entirety of the film my eyes are filled with tears. Even now as I write this post I try to keep them at bay. But the part in which I cry outright, tears streaming down my face, as they actually are doing now as I recall the scene, is when the lovely Carol dies so suddenly and prematurely. My great aunt, who is ninety one years old now, one of the few remaining of that generation on my mother’s side, still talks to me of Carol’s death whenever I see her.

For me, and I think for many of us, Carol is the representation of all that is clean and bright and good during the war, surviving in the broken down structures of bombed houses and churches. The hope for a brighter tomorrow. When she dies, a small part of our own heart dims. Teresa Wright’s performance as Carol is brilliant throughout the film, but it is the manner in which she acts out Carol’s death that shows her enormous talents and sensitivity as an actress. I know now that when Carol asks her mother in law for a glass of water it is to spare her the sight of Carol’s bright young light being extinguished. Even in that moment, when she knows she will die, Carol still thinks of someone other than herself, someone she loves. What makes this turn of events so shocking, but real and impactful, is that it is not her husband, Vin, a pilot in the RAF who dies as we and the characters expect, but her. Such a seemingly unlikely candidate for death. And in this way, as it does in many other ways, Mrs Miniver subverts expectations and war film tropes and reminds us that it has such heart, such an awareness for the terrible agonies of war. 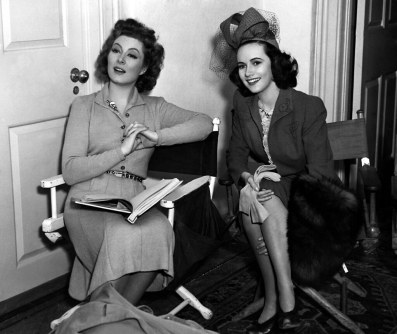 Greer Garson (left) and Teresa Wright, starred in the 1942 Academy Award®-winning film “Mrs. Miniver.” Both were honored with Oscars® for their roles in the film – Garson won the Lead Actress Oscar® and Wright won in the Supporting Actress category. Though she was only in her early thirties, Garson played Wright’s mother-in-law in the film and later married Richard Ney, the actor who played her son. Restored by Nick & jane for Dr. Macro’s High Quality Movie Scans Website: http:www.doctormacro.com. Enjoy!

I think of not only how my grandmother felt when she watched the film many years after the war had ended, but of how audiences felt when they watched the film during the war. I think that in themselves they saw some representation of the Minivers and the other characters, so real no matter how small their role, in themselves. When those who have thus far survived in Belham sit in a church that has only half a roof and barely any walls, the message of the film becomes really clear: the human spirit is one of the strongest things in this life, it will live on no matter the destruction of what it holds dear, as long as we remember that as Mr Ballard says, there will always be a time for flowers, even during war. Because flowers grow in cracks, they grow on fields where young men’s bodies once lay, they grow under a sky where a church roof used to be. They grow and grow and grow. Forever. 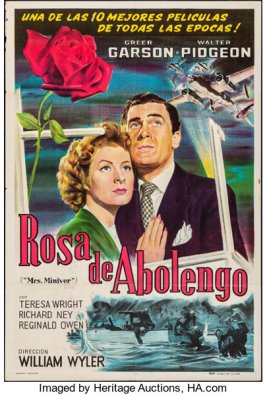 This is my first contribution for The World War II Blogathon being hosted by Cinema Essentials and Maddy Lovers Her Classic Films. Please visit their blogs for more information on this event that remembers such an important time in human history.