The Last of the Mohicans (1992) was one of the first movies I bought with my own money. I bought it quite by chance, a common thing it seems for films I came to love fiercely.

Based on James Fenimore Cooper’s 1826 novel The Last of the Mohicans: A Narrative of 1757 and the 1936 film adaptation, the film was directed by Michael Mann and starred three time Oscar winner Daniel Day Lewis, Madeleine Stowe, Russell Means, Eric Schweig, Jodhi May, Wes Studi and Steven Waddington.

Cooper’s novel is part of The Leatherstocking Tales, a series of novels about Natty Bumppo, a white man adopted by a Mohican Chief, who is more commonly known as Leatherstocking and Hawkeye. Set during “the eighteenth century era of development in the primarily former Iroquois areas in central New York.” The series, but especially The Last of the Mohicans, was groundbreaking for its sensitive and complex treatment of the Native Americans and their relationships with white settlers. This is in sharp contrast to its contemporary novel Nick of the Woods by Robert Montgomery Bird, which portrayed Native Americans as savages capable only of unintelligent English such as “me kill white man”, which the novel popularised, and championed the murder of Native Americans by a white renegade.

The film follows Hawkeye, his brother Uncas and their father, Chingachgook, during the French and Indian War. At first, the three men are not involved in the conflict, but the death of their friends on the frontier and their saving of Cora and Alice Munro from a Huron war party led by the vengeful, Magua, leads to them being inexorably involved.

Shot in North Carolina, the film shows the Great American Wilderness as it was in the 18th century, unindustrialised and beautiful. Michael Mann creates a love letter to all the waterfalls, luscious mountains worn down millions of years ago standing like great silent sentinels, and rivers running with multicoloured clarity. The setting of the story is as important as the human events that unfold. As Chingachgook says of his own people, the wilderness that is portrayed is at an end. The natural mists seen in the closing scenes will soon be replaced with the pollution of European factories and “progress” built on the blood of both Native Americans and poor settlers.

The story is brilliant and important in its portrayal of how European empire building led to the death of Native American traditions and the very fabric of their lives, and also the sacrifice of poor frontier settlers who were not protected by their monarchs. This is shown in keen focus by the treatment of colonisers who want to return to their families when they are threatened and murdered by roving war parties, and how Native American conflicts are exploited and trivialised by European powers for their own purposes. 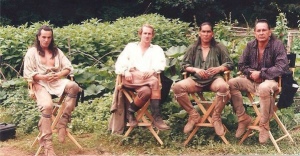 The scene in which Hawkeye, Unca, Chingachgook, the Munro sisters and Duncan find the murdered Camerons and their burnt out home, which had sheltered the men only a few days before and been a source of happiness and belonging; is one of the most heartbreaking in a film that is filled with tragedy. It shows the prejudices of those living in the supposed civilised world and what they believe are the behaviours of the supposedly uncivilised. Cora accuses Hawkeye of being cruel and savage because he won’t bury the Camerons. Hawkeye very quickly disabuses her of this notion with his explanation of the difficulties of living in the wilderness, and how one must fight to connect to other people. This is the beginning of Cora’s maturation and realisation of the world beyond her very small, staid one.

Cora and Hawkeye’s relationship is one of the most important aspects of the film. Their connection shows how love knows no prejudice and can bloom in the most unlikely of places. Their love is what gives the ending of the film hope, after the death of so many innocent people in a terribly complex and unwarranted conflict. Madeleine Stowe and Daniel Day Lewis’ chemistry is really powerful and genuine, giving life to two fascinating and relatable characters. Both Cora and Hawkeye are passionate, relatable people who do not back down in the face of much adversity and heartbreak. 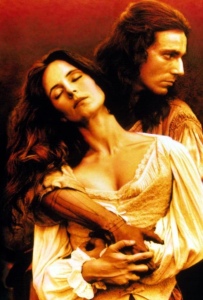 Alice and Unca’s love for each other is a far more fragile, and ultimately doomed thing. But it is no less important than that of Cora and Hawkeye’s. For the first time in her life, Alice is treated like a woman instead of a fragile child. 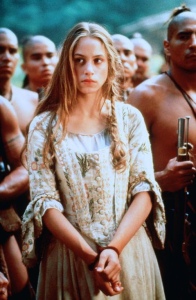 Her and Unca’s death is utterly soul destroying, but Alice shows the power of love and absolute bravery. Instead of being violated by Magua and forgetting her love for Unca, she chooses to decide her own fate, even if it is a heart rending one. The manner in which Eric Schweig and Jodhi May act out the scene is incredibly memorable. Without any dialogue, they show their soul bond. Alice’s face before she dies is filled with maturity beyond her years.

While the performances of everyone in the film are brilliant, the two standout performances are that of Daniel Day Lewis and Wes Studi. Hawkeye abs Magua are clearly the same sides of one coin. Both have lost their families, and both were adopted by the Mohawks, but this adoption sets them on disparate paths. Hawkeye sees the wonderful gift that his father and brother are to him, how they helped him adopt an individual, special identity as the child of two worlds. Whilst Magua sees himself as being made to feel subservient to another clan. He cannot be either Huron or Mohawk, and becomes a terrible outcast. Magua’s story is one that shows the terrible wound of colonial conquering. 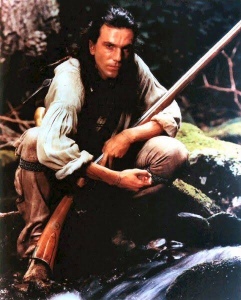 This is a story about people. And it’s told from the unusual perspective of minorities: Native Americans and women on the frontier. This is a film that will stay with you for a long time after you watch it. Its message is one that is still current. Change should not be undertaken at the expense of people. 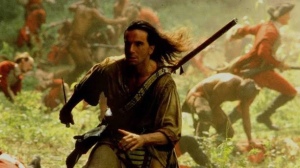 This is my contribution for The Costume Blogathon being hosted by Debbie at Moon In Gemini. Please visit her blog to read all the no doubt fabulous entries. 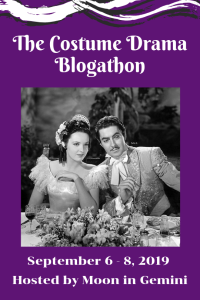