Yes it’s more than rather eye roll inducing when you think about how men can play romantic or action leads well into their seventies and eighties (I’m looking at you, Harrison Ford), and women are relegated to the mother, spinster aunt or grandmother roles when they’re over fifty (hurray for Jessica Fletcher for not succumbing). And it’s true that quite a few older men/ younger women pairings can be rather cringeworthy, but the thing about Astaire is that he always saw the enormous talent in his young costars, and wanted to highlight that. 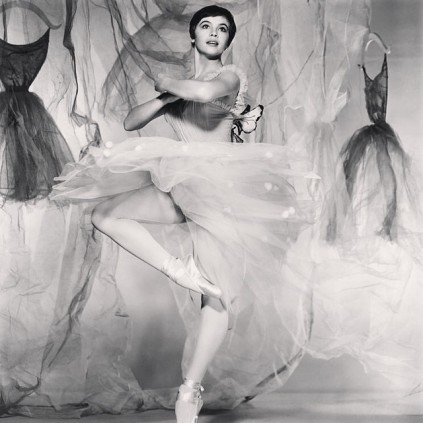 Daddy Long Legs tells the story of a young French orphan, Julie (played by Leslie Caron) who is taken out of poverty and obscurity by the largess of an anonymous benefactor, whom she calls “Daddy Long Legs”, as he is described as tall and thin by her fellow orphans, as they see only his shadow. Julie attends college, and enters into childish romances and makes friends, but all the while she harbours a secret love for her Daddy Long Legs. Finally, when Jervis Pendleton, her benefactor, visits her at school, they fall in love. But Pendleton is disturbed by their respective ages and his role as her nameless guardian.

I discovered, as I do with many classic films, Daddy Longs Legs quite by chance. I’ve long adored the films of Astaire and Caron, both of whom I think are two of the greatest dances of the Golden Era. Caron was cast as Julie upon Astaire’s insistence, who obviously recognised the talents that she had displayed in the wonderful American In Paris, opposite another dancing juggernaut, Gene Kelly. Caron is the perfect choice for Julie, who is young and innocent, but also keenly intelligent and extremely likeable. With natural ease, Caron shows how Julie goes from being a child to a young woman who is very much of her own mind. Her dancing is also absolutely stunning, and although the “Nightmare Ballet” sequence would be heavily criticised as overly long and interpretative for a mainstream musical, it showcases her natural grace as well as her capacity for making difficult routines seems largely effortless.

As [Astaire’s] first film in Cinemascope widescreen – which he was to parody later in the “Stereophonic Sound” number from Silk Stockings (1957) – Daddy Long legs provided him the opportunity to explore the additional space available, with the help of his assistant choreographer Dave Robel. Roland Petit designed the much-maligned “Nightmare Ballet” number. As usual, Astaire adapted his choreography to the particular strengths of his partner, in this case ballet. Even so, Caron ran into some problems in this, her last dance musical, to the extent that Astaire mentioned in his biography that “one day at rehearsals I asked her to listen extra carefully to the music, so as to keep in time”. Caron herself puts this down to flaws in her early musical training. The final result, however, has a pleasing and appropriate dream-like quality. In this respect, it is a more successful attempt to integrate ballet into his dance routines than his previous effort in Shall We Dance (1937).

The extremely energetic and enjoyable school dance sequence shows how Astaire masterfully took advantage of the use of Cinemascope, with the use of many dancers in a widespread sequence. This also shows how Astaire, as mentioned above, so masterfully adapted his dancing style to what was required in each of his films. While he is best remembered for his ballroom dancing with Ginger Rogers, his enormous talent made it possible for him to explore many different techniques.

While Caron says that there were flaws in her own early musical education, Astaire’s adaptive style, especially in this film and Funny Face, which both heavily highlight 1950s jazz music and tempo, shows his incredible understanding of how inseparable dance and music truly are. 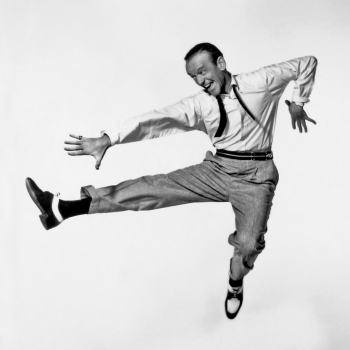 What I think I like best about this film, is its dreamlike qualities intertwined with the cultural identities of the decade. The film begins with Astaire playing along with a jazz recording, hitting his drums happily while legendary character actor Fred Clark tries to speak to him about financial concerns.

In this way, Daddy Long Legs speaks to the same concerns as Sabrina the year before, with the changing insights of American society highlighted after World War II. Daddy Long Legs isn’t a film with heavy societal insights, but it is a film that showcases how the shifting manner in which studio musicals were made, and how they were becoming more youth orientated in some aspects.

While this isn’t Astaire or Caron’s best film, it does contain some of their best and most experimental dancing. It shows the talent that both of them possessed, and how well matched they were. It also conveys how Astaire really could dance with just about anyone. While Caron and Audrey shared a background in ballet, their styles were quite different, and as previously mentioned, Astaire clearly recognised that and adapted to it. In Daddy Long Legs, he doesn’t do exactly the same things as he would do two years later in Funny Face.

If you’re a fan of Astaire’s musicals that he made in the 1950s, like I am, then I definitely recommend this film. It isn’t quite as memorable as Funny Face or Silk Stockings, but Astaire and Caron are a delight together, and seem to be dancing on air.

This is my contribution to The Second Fred Astaire and Ginger Rogers Blogathon being hosted by Michaela of Love Letters to Old Hollywood and Crystal of In The Good Old Days of Classic Hollywood. Do visit their blogs to read more posts about this fine and fancy footed duo!