Like most people born before the 2000s, I came into contact with classic films through two avenues: a video tape that my parents or some other adult bought and which was rewatched until it gave a dying jolt in the video machine, or through TV. Where I live, there’s an open access channel which does not resemble what is was when I was a child. Now it plays mostly Christmas movies and local soap operas, it’s even expanded into its own rather nifty news channel which my dad watches. But when I was a child, it played some really great classic films, and one of those treasures was The 7th Voyage of Sinbad. 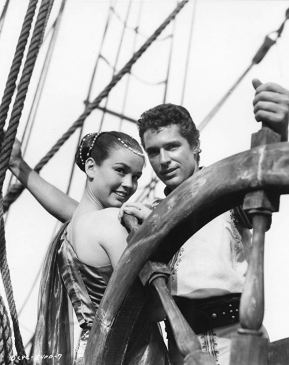 I had no idea that that was the name of the film until fairly recently, and I only clicked because of the classic film poster that Indicator used on their Blu Ray release of the film, a poster which has now become iconic for Sinbad steering the wheel of his adventure-bound ship, with his lady love beside him.

The film tells the high adventure tale of fearless sea captain Sinbad, who along with his equally fearless and loyal crew, has set out on many a dangerous mission, into lands unknown and territories uncharted! But this time he really has taken on perhaps more than he, or a large, hungry cyclops, can chew. Due to the malicious magic of genie owning wizard named Sokurah (played by great character actor Torin Thatcher), Sinbad (played by the lovely Kermit Matthews) must return to an island that is pretty much at the end of the known world, in order to save his beloved princess, Parisa (played by the very likeable Kathryn Crosby), from being cursed with life as a human being no larger than a small figurine. Will Sinbad save his princess from life in a tiny, ornate cupboard? Or will Sokurah take over the world with his wicked ways and shiny pate?

This film is 1950s fantasy adventure at its finest. The film was shot in dazzling Technicolor, which created a wonderful world of rich blues, greens and purples, especially during the scenes set in the genie’s lamp. This visual richness intensifies the dreamlike, fantastical elements of the film to such a degree, that I cannot imagine the film not being in colour, and that’s saying something from someone who adores film noir. 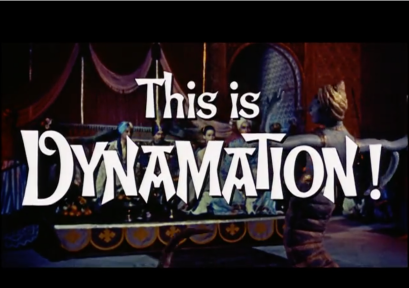 But the island of Colossus, that strange rocky outcrop on the tumultuous sea, is brought to wonderful life by this use of epic colour, most notably when Sinbad eventually gains access to Sokurah’s lair and fights a sword wielding skeleton.

And this is probably what the film is best remembered for now, and has much to do with its still impressive reputation: Ray Harryhausen’s absolutely exceptional visual effects. To the modern eye, it is clear that Harryhausen would be a major influence on successive kings of the practical effect, namely Stan Winston and Tom Savini. The scenes involving the cyclops are so intricate that it is difficult to believe that it was a small scale puppet. 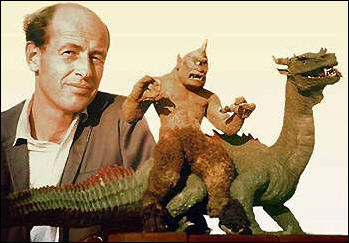 But it is the fight scene between the skeleton soldier and Sinbad that never fails to delight and astound me. Over sixty years on, and you still gasp at the skeleton’s deadly intentions towards our hero under the influence of the manic magician. It is almost impossible to describe these effects and scenes in the manner in which they deserve, and still pictures just do not do them justice, so this is yet another reason to seek out the film. 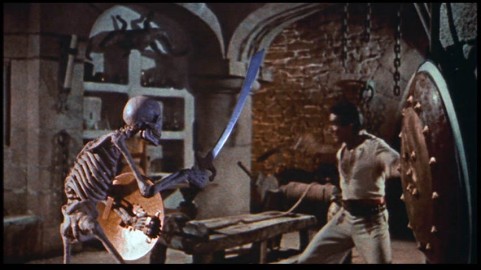 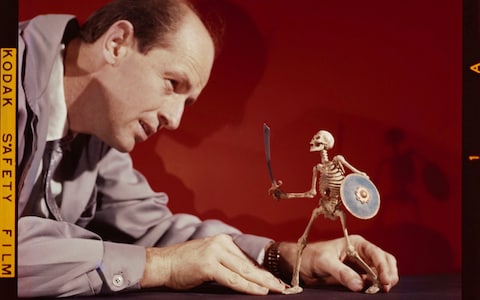 But it’s not only the special effects that makes the film so enjoyable and endearing, but also the fact that the two leads are so likeable and Torin Thatcher is just such a delicious baddie, with his OTT villain accent and body movements. This was the first film that I ever saw Kerwin Matthews in, and it is the film for which he is best known, which is understandable, seeing as he is absolutely perfect in the role of the brave, handsome and earnest Sinbad.

Right from the beginning of the film you are entirely behind him in his quest to save his lovely princess and defeat Sokurah. But, what I really like about the film is that Princess Parisa doesn’t exactly sit pretty in her little cupboard. She is as brave and vital to the plot as Sinbad, and is the reason that the young genie eventually helps them defeat his tyrannical master. Kathryn Crosby elevates her part and makes herself as memorable as her male stars who could have easily dominated the film in such a male centred genre, and she achieves this through a natural and endearing performance. 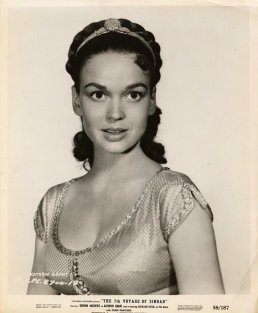 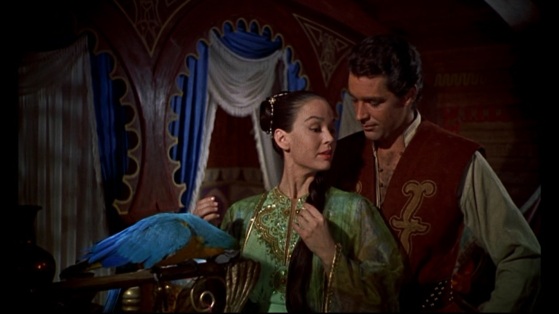 There’s a reason that this film has endured for so many, many years, and had such an incalculable impact on the genre. It spawned many sequels, and Sinbad the Sailor is still one of the most well known fictional characters of literature and screen. But this film will always be the original, the one that showed that adventure films could truly push the limits of the imagination and the filmmaker onscreen, seemingly epitomising the sparkling magic of the Silverscreen. 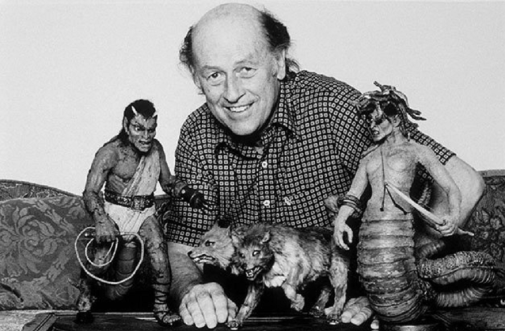 This is my contribution to The Out To Sea Blogathon being hosted by the wonderfully named Moon In Gemini. Please visit her blog to read more posts about adventures on the high, and maybe low, seas.

11 thoughts on “Sailing Takes Me To Where The Evil Magician Wants To Be: The 7th Voyage of Sinbad (1958)”