When my mother was a child, her mother took she and my mother’s younger brother to the movies whenever she was able. The mother of four, my grandmother had little time for leisure activities, but books and movies were very important to her, and she passed her love for both onto her two youngest children.

When I was very small, just a toddler, my mother worked from home. This was a big adjustment, as my mother had worked at a major insurance company for a decade, commuting to and from the city everyday for all those years. While she and I often watched films together, one day she had to work beyond just the morning, and so she had to find entertainment for me. According to my mother (at times my siblings like to differ) I was never a troublesome or demanding child. As the youngest of five children, that kind of behaviour just didn’t fly. And so I was quite happy to play by myself and watch movies alone for quite a while. 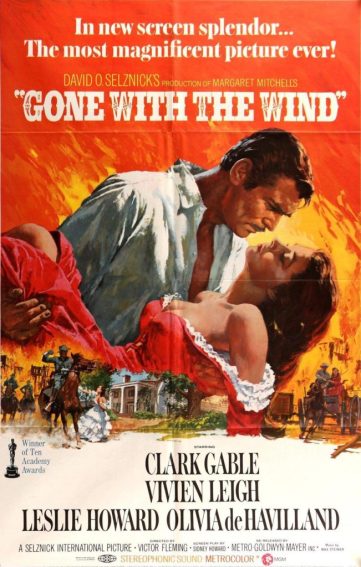 That was how my mother came to put on the film that would define my future taste in films: Gone with the Wind. It’s difficult to describe how arresting I found the film at the tender age of three. When I tell people that I watched such an epic at a very young age, they are either sceptical or amazed. Their reaction doesn’t really mean much to me. What matters to me is the memory of watching the film for the first time. How riveted I was, how the colours, not as sharp as they would be on my DVD copy later, as it was on a well loved bought video, were unlike anything I’d ever seen before. Many memories from my early child are lost to me now. But that one never will be. I suspect that even when I am on my deathbed one day I will remember exactly how it felt to watch Rhett and Scarlett kiss in the crimson twilight, and to watch Rhett be swallowed by the mist of Scarlett’s dream made reality at the end of the film. Gone with the Wind is a film that has defined my movie watching experience. To me, despite all the criticism heaped upon it eighty one years after its release, it is still one of the best films ever made, and one that dwells within my memory always.

I wrote this post at the request of my very good blogging friend, Paul Batters, the author of the lovely Silver Screen Classic blog,  who reached out to the classic film blogging community on twitter with the wonderful idea of each of us sharing the story of how we became classic film fans. Thank you, Paul, for making this recollection of such a happy event possible.

5 thoughts on “A Silver Discovery: How I became a classic film fan”