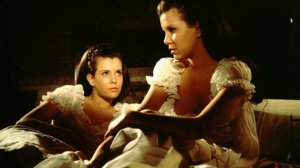 Twins of Evil is fascinating because it comes after Lust for A Vampire in the Karnstein Quadrilogy and it’s as if someone said “What made The Vampire Lovers good and Lust for a Vampire awful?” Don’t get me wrong, Lust for a Vampire is a film of which I am very fond, but it is not a good film, and definitely not one that should have followed The Vampire Lovers, nor one that should’ve been made when Hammer was in its death throes.

Like Vampire Circus, Captain Kronos and Countess Dracula, Twins of Evil is a refreshing film in the late Hammer canon. And it is also fascinating due to the role Peter Cushing is cast in, but let me not put the torch before the pier. Sorry that was a bad joke.

Twins of Evil does not use Sheridan Le Fanu’s legendary source material as closely as either The Vampire Lovers or Lust for A Vampire, and that’s saying something because those two veer quite sharply in some areas. But this does not detract from Twins. It is in fact one of its strengths. As with the above mentioned later Hammer outings, Twins seeks to combine the real and the supernatural.

The supernatural is of course conveyed through vampirism, and the legacy of Carmilla, the mother of her species, in both the Hammer quadrilogy and literature (as she predates Dracula by a quarter of a century). But this is combined with the real superstitions of a small community, which has been beset both by the shadow of the Karnstein legacy and the local puritanical religious men, who burn young women as witches as if it’s going out of fashion. 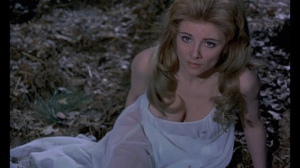 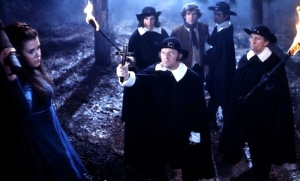 This film is also notorious for its starring of two Maltese identical twins who became famous due to Playboy: Madeleine and Mary Collinson. Madeleine and Mary play the titular twins, but unlike the title suggests, and despite Cushing’s character’s statement, both twins are not evil. Through the characterisations of the twins, as well as the burning of young women, all of whom are on the brink of sexual maturation, the Madonna-Whore dichotomy is explored, as is men’s fear of female sexuality. Their demonisation of it and their punishing of women, throughout history, for it.

The story follows, as I said, twins, Frieda and Maria. Maria (played by Mary) is saintly and kind, while Frieda (played by Madeleine) is rebellious and cruel towards her sister. Frieda and Maria both dislike their uncle, Gustav (played by Cushing), who is unyielding in his religious fanaticism, especially towards his nieces who he feels have been improperly brought up by their now dead parents.

Maria falls in love with the open minded local music teacher, Anton (played by a very cute David Warbeck), but he is besotted by the more sexually alluring Frieda. But Frieda is fascinated by Count Karnstein (played by Damien Thomas), who has a reputation for debauchery, and unknown to Gustav and the rest of the townspeople, has now become a vampire, through a satanic ritual. Said ritual awakened his distant relative, Mircalla (Carmilla) who infected him through pseudo incestuous…um… familiarities. Mircalla/ Carmilla’s part is very small, she acts as a conduit for the vampirism that the Count enacts, which explains why Ingrid Pitt passed on the role, which was much reduced in comparison to The Vampire Lovers. 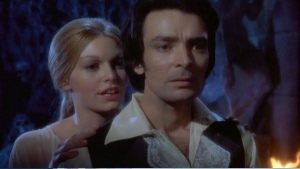 Unsurprisingly, the Count has his way with Frieda, who turns from a girl with cruel and sexually amoral potential, to a seductive killing machine.

And so through Maria, Frieda and the young women who meet their end by fire, as well as Gustav, Anton and the Count, the incompatibilities of women’s sexual roles in society, almost always through a male lens, are explored. Maria is the Madonna, and so she must not be punished, but Frieda is the wanton antithesis, and so she must be punished, although she very nearly has her way with Anton, and apparently in a deleted scene, her own uncle.

What is so interesting about this film is its almost utter departure from the lesbian exploitation of Lust for a Vampire and borderline tendencies in The Vampire Lovers. This film is far more pronounced in its exploration of the loneliness of the pious, the danger of decadence, and the need to live a balanced, informed life. This film does not sermonise, that isn’t its function, but it it’s surprising thoughtful if you take the time to look at these themes. It isn’t a dumb, lumbering film by any means, both because of its larger, and often subtle, concerns, and the performances. Mary and Madeleine, despite have almost no acting experience, really acquit themselves well in the respective roles. Madeleine is particularly good as Frieda, and Mary really plays off her sister well in their scenes together. Damien Thomas and Anton Warbreck both do much with roles that could’ve been forgettable and yawn inducing if given to less committed actors. Thomas manages to run a gauntlet of emotions and character developments in a brief time without coming across as hammy. Warbreck overacts slightly in places, but he’s as cute as a button and so enthusiastic. He also does nicely towards the end of the film once he’s really got his er teeth into it.

But the standout performance is Cushing’s. As many horror fans know, Cushing is one of the most underrated dramatic actors of his generation. His turns as Van Helsing, Frankenstein and Sherlock Holmes are, in my humble opinion, the best and one of the best, respectively. As Gustav is a man possessed, but hollowed out by mania, ignorance and fear of his own and women’s sexuality. He is utterly haunting in the role, his blue eyes cold, angry, regretful and despairing when required. He moves through the film so seamlessly. He supports all the younger actors so well, showing his desire for them to shine rather than himself. And he wasn’t called the Master of Props for nothing, with his fabulous Puritan hat and knee high boots. His character has a wonderful arc, made even more memorable by yet another stand out performance from the man himself. It amazes me that after so many years in the genre, Cushing never sleepwalked through a role. Now that’s talent and professionalism. We thank you, sir!

This film may be regarded as sexploitation, but like Vampire Circus, it will defy your expectations. This could very easily have crumbled at the halfway mark, falling into rubber bats and too big false teeth. But it really is thrilling from start to finish, with its dark sensuality, its exploration of male hypocrisy, and the moodiness of its direction and script, both well crafted by John Hough and Tudor Gates (what a name!).

Give this one a go. Allow yourself to enjoy the lack of camp, the atmosphere, the interesting playing out of the story, and most all, Peter Cushing imbuing a lot of complexity in the kind of role that many other, more celebrated actors have played, but not done as well in.

This is my second and final contribution for the Hammer Amicus Blogathon being held by the delightfully devious Gill and Barry of Realweegiemidget Reviews and Cinematic Catharsis. Please read my first post for further details.