As human beings, we often fail to think about, or realise, how important the big picture is. We talk about “seeing” the big picture or how we need to look at the “big picture”, but we very rarely do. A lot of the time, we make decisions, often crucial, life changing ones, based on assumption, the assumptions we have formed after much internal dialogue, but very little meaningful external communication. And that’s exactly what happens in the Coen brothers’ debut Neo noir film Blood Simple.

The film begins with a voice over from M Emmett Walsh, who plays the sleazy, morally bankrupt private detective, Loren Visser. He talks about how the Soviet Union functions, how their economy and social structure is based on communal living. If everyone pitches in, then everyone gets something out. But things don’t work like that in Texas, Visser muses, it’s everyman for himself. And Visser is definitely going to look out for numero uno.

Walsh is hired to tail and spy on a Greek, equally morally bankrupt, strip club owner’s wife and one of his barman. The Greek bar owner, Marty (played by Dan Hedaya), is so incensed by the fact that not only has his young wife, Abby (played by Frances McDormand) left him, but that she’s left him with one of his employees, who he sees as being far below him. And so he tasks Visser with murdering not only his wayward wife, but also his uncomplicated barman, Ray (played by John Getz). And it seems that Visser follows through with the plan, he even furnishes Marty with a seemingly airtight alibi of suggesting he go fishing in Corpus Christi. But Visser has very different ideas, and kills Marty, before attempting to break into his safe. 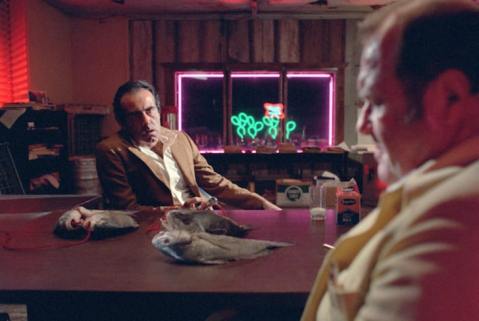 Things go rapidly downhill from here, almost entirely because of miscommunication and a complete lack of communication between Abby and Ray. Ray, who has lived his life in a seemingly straightforward fashion until this point, finds himself in an increasingly overwhelming and complex situation, and becomes “blood simple”, meaning that he cannot cope with the violence and uncertainty that he is seemingly faced with. He continuously misinterprets the events around him, and whilst doing so, becomes increasingly unpredictable in his behaviour, giving the incorrect impression that he may have enacted these violent acts himself.

John Getz’s performance as Ray is extremely impressive. Until this film, Getz had done little to remember, even though he was already approaching middle age. But his talent for his craft is abundantly clear in this film. Ray is a character that cannot be overacted, otherwise the entire structure of the film would fall apart. Getz shows Ray’s slow mental decline in ways that are far more effective and unsettling than outbursts or overt physicality would manage. 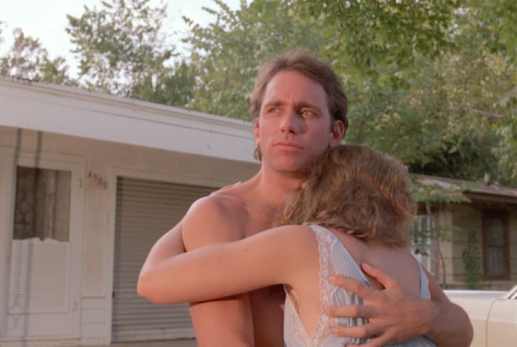 There is a scene which directly follows the event which entirely unmoors Ray’s entire world, that of finding Marty’s body and then burying a still live Marty in a cornfield; in which Ray falls asleep in Abby’s newly acquired rathole apartment. Ray has smudges below his eyes, and his once relaxed, almost arrogant posture is broken, leaving him looking like a startled, traumatised child. When he becomes certain of Abby’s complicity in Ray’s demise, Getz’s shows how Ray’s mind absolutely gives. His eyes become unfocused, and he stares at Abby as if the building in which they’re standing has suddenly been hit by an earthquake and everything is being destroyed around them. And metaphorically, it is. Everything that Ray has believed about life up until this point, is gone, leaving him entirely and traumatically unmoored. It’s safe to say that Ray is deeply shellshocked and will not be able to recover from recent events. And it is also safe to say that he is doomed, because when he finally begins to realise that he has been wrong about all of his assumptions about Marty’s death, he is in the deadly sights of Visser. 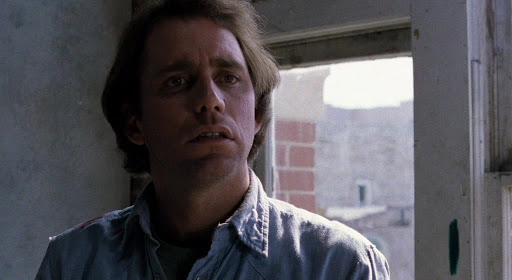 The character of Abby is not entirely sympathetic to begin with. She embarks on an affair with one of her husband’s employees knowing how mentally unhinged Marty is, and then pursues it even further whilst knowing how high the stakes are. She even acquires the gun that will not only doom her husband but also her lover. But she does all of these things with the lack of foresight that most children have. She does not mean to bring about any deaths. Her actions, whilst irresponsible, are not meanly done, and there is no way that she can comprehend what her husband has planned or what he will bring about. Like Ray, she is uncomplicated, and comes across as being almost mentally compromised at times. But this is of little surprise, as she has been brought up in a society where women are afforded little self actualisation or ambition. Texas, is no country for women. In the end, she unwittingly makes it possible for Visser to murder Ray by switching on the lights in her apartment, despite Ray pleading with her not to. But once again she cannot be entirely blamed for this. As the audience we know that Visser is waiting on the adjacent roof top to shoot Ray, but Ray’s garbled pleading, and an ill timed repetition of declarations of love, means that she cannot possibly understand any of what is about to unfold. In the end, she still believes that she has wounded and subsequently shot her husband, who Ray earlier said he’d buried alive, but not directly, once again not allowing Abby to understand all of the moving parts of their situation.

Blood Simple was Frances McDormand’s debut role. She was twenty seven at the time, but looked far younger than that due to the childlike way in which her character dresses, and also the childlike way she acts out the role. It’s amazing to think that she would go on to play entirely disparate roles in Fargo and Three Billboards Outside of Ebbing Missouri. But the way in which she holds her own in a film as complex as this is truly impressive. When she is confronted by her lover’s corpse and the fact that she has probably committed murder, McDormand acts out this scene in a way that intensifies the tragedy of the entire story: quietly, desperately.

At the end of the entire complicated, blood soaked story, the only two people who know what actually happened, are Marty and Visser, one of whom has choked to death on soil in a lonely Texan field, and the other of whom eventually meets the same fate, but lying under a leaking bathroom sink, laughing the same deranged laugh that has become his trademark throughout the film. Not knowing the big picture, and not being able to or being unwilling to, communicate it, ends up resulting in the death of three people and the eventual committing of murder by self defence by a fourth.

This film, as with all Coen films, is one that commentates on the fabric of American society. Texas is shown as being an inhospitable, violent place in which to live. And every place that the characters find themselves in are isolated, both geographically and mentally. Marty’s bar is situated on the side of a long, lonely highway, and he meets his death in a field that never seems to end. Even Ray’s small suburban house is isolated, and the fact that it is on a road that has a dead end shows the reality of Ray’s life as well as what his eventual fate will be. Abby lives in an apartment that is one large room with a small bathroom, and no one seems to hear anything when Ray is shot and Visser eventually stalks Abby. As the minds of the characters pull away from the reality and rules of society, so do the places which they inhabit.

The only character who continuously remains in the world outside of the one that has become increasingly blood simple or crazy, is Ray’s fellow bartender, Meurice (played by Sam-Art Williams), and even he misconstrues situations. Although his advice to characters is sound, such as warning Ray to stay away from Marty’s bar and for Abby to remain in his apartment. The fact that Meurice is also black in Texas and in an all white cast also makes an interesting commentary on racial realities in America, where African Americans are constantly seen to be lacking in sense and also dangerous. None of the violent acts are committed by Meurice.

I think the best performance in the film is that of M Emmet Walsh. By the time Walsh starred as Visser, he had over seventy acting credits to his name. Visser is portrayed as being completely grotesque, and this is intensified by the fact that Walsh realises the character as not only being entirely void of any moral sympathies, but also has having a reptilian air about him. A fly continuously hovers around his head, even landing on his eye at one point, giving the impression that Visser may very well be Beezlebub, the King of Flies, realised in the form of a scheming, blood thirsty Texan private detective. He is the stereotypical realisation of the Texan man: he wears a slightly soiled ten gallon cowboy hat and rolls his own cigarettes. At one point in the movie, when Marty comes to proposition Visser with committing double murder, Visser is shown with a girl who is barely sixteen. He laughingly tells Marty that she believed that he had marijuana because he rolls his own cigarette. You wonder, however, what would have happened to that young girl if Marty hadn’t arrived. 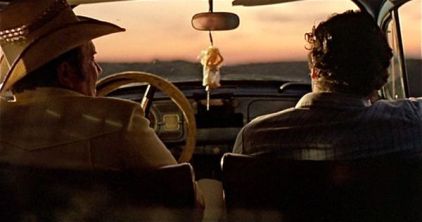 Blood Simple was Joel Coen’s directing debut and Ethan Coen’s first screenplay. It is quite obviously influenced by Alfred Hitchcock’s films with its focus on confusion and misinterpretations, but it features characters quite different to Hitchcock’s sophisticated set. Even Norman Bates seems more sophisticated than the cast of characters that populate this film, although Visser is perhaps even worse than Norman, as he commits acts of extreme violence with pleasure and conscious calculation.

To think that was not only the Coen brothers’ first film, but also Barry Sonnenfeld and Carter Burwell’s, is quite staggering. The film is so clean, without any spare flesh on it to interfere with the suspense and increasingly tense pace. Sonnenfeld’s cinematography captures the unremitting heat and grime of Texas as well as the unappealing colours and settings which the characters inhabit. And Burwell’s haunting theme for the film with its lonely piano sound, stays with you long after the film is over. I’ve listened to it several times since watching the film and it never loses its melancholic brilliance. 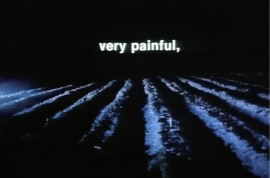 This is the kind of film that makes you realise how much of human existence is based on chance, as well as the decisions of others that you are often not even aware of. The places in which we are born and which we die, make up so much of who we are, and we cannot escape that. We try to rage against things, to change things, to do what we believe is right, but in the end, it’s all beyond our control. We try to hang on to what we believe to be true, but we often cannot see the truth because of our own internal inclinations. Whether we’re buried alive in a field, shot through a window during the night, or lie dying under a leaking bathroom sink, we’re all going to die, and we might as well make peace with that. 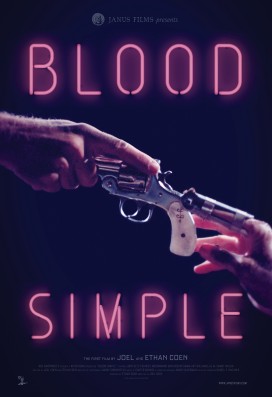 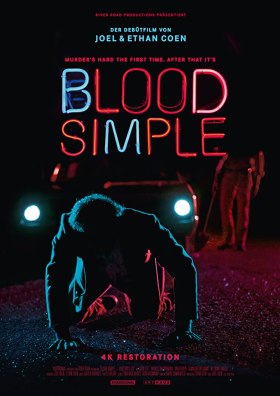