I am posting this on behalf of VT for the The Man Who Would Be Shane: The Alan Ladd Blogathon. PLEASE DIRECT ALL COMMENTS TO VT ON THEIR EMAIL ADDRESS OF VTDorchester@protonmail.com

Hello! I’m VT – a short story writer and Alan Ladd fan without a blog. (Although I do have a twitter account @VtDorch) I watched The Big Land (twice) last December, and am happy to share my review with you all here, through Pale Writer’s ‘The Man Who Would be Shane’ Blogathon. (Much of the data for this review was drawn from or confirmed by IMDB.com, but any mistakes are likely my own.)
This review contains spoilers. Consider yourselves warned. 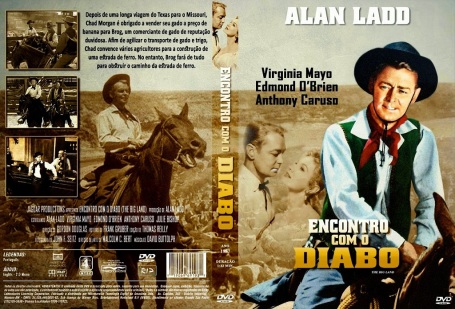 “What makes them [coyotes] howl like that?” – Virginia Mayo as Helen Jagger in The Big Land
“The night, lonesomeness” – Alan Ladd as Chad Morgan, ditto
“You’re a strange man.”
“Maybe I’m like one of those coyotes.”
“Are you that alone?”
“I used to be.”