O.S.S is a war film of a different sort, as it tells the story of both civilians and those on the front lines, but not through the story of uniformed soldiers or by focusing on families back home. It explores the agency that was the predecessor to the know famous (and sometimes infamous) CIA. The Office of Strategic Services existed from 1942 to 1945, and the written introduction to the film explains that it is a love letter to all the men and women who took on the dangerous assignments during the war that involved espionage.

The screenwriter was none other than Richard Maibaum, who would go on to write the script for another Alan Ladd film, Red Beret, and twelve of the first fifteen Bond scripts from 1962 to 1989, including Dr No, The Spy Who Loved Me, The Living Daylights and Licence to Kill. Red Beret did not only have Maibaum as its Bond connection, but the involvement of Cubby Broccoli and Terence Young. Both these films have Maibaum’s signature flare for gadgetry and clever weaponry, as well as their focus on the personal price that espionage had on the agents deployed to undertake this transient, deadly work. In Alan Ladd’s character, Phillip Masson/ John Martin, there is some of the seeds of Connery and Dalton’s Bonds. A character made mentally unstable by the terrible tasks of spying and the denial of a normal life, including that of normal, fulfilling human love. 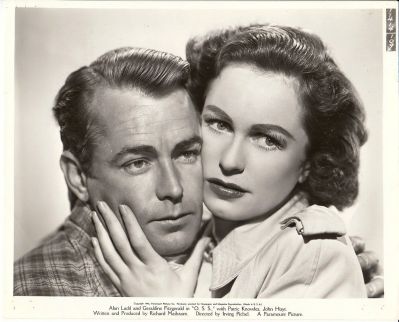 The film tells the story of four people who are deployed to France by the OSS, under the cell name of Applejack. This work includes making contact with the French resistance, which is struggling to exist under the onslaught of Nazi occupation; and to destroy all major transportation lines, particularly a bridge which would assist in paralysing the Axis forces during the Allied invasion. Phillip Masson (who shares my rather unusual surname) becomes John Martin, and during the mission, which sees the death of many of those involved with the mission, falls in love with Ellen Rodgers (played by Geraldine Fitzgerald), who assumes the name of her dead friend, Iaine Dupree. But this love is doomed from the first due to the nature of their mission and their existence during the war.

I first watched O.S.S in my quest to watch as many Alan Ladd films as possible, because he is my favourite classic film actor. I did not know what to expect, but as a life long James Bond fan, I was intrigued to watch a film that bore the early Hallmarks of Maibaum and the universe of espionage he would create later on in the Bond canon. I was extremely impressed upon my first viewing, and upon my subsequent viewing for this blogathon, some time after my first, I was no less impressed. The script is tight, leaving no room for any meandering or dips in the action. From the first time we are introduced to John and Iaine, the film assumes a punishing pace, but manages to not sacrifice the development of the characters. While we do not know everything about their backgrounds, we are provided with enough focus on them throughout the film to make us really come to care for them. Even characters who are not afforded as much time as our young lovers, become important to us.

The plot, while fairly basic, is cleverly woven by Maibaum to show the very high stakes, and to also show how people were so deeply affected by a war that was unlike any other that had come before it. An unexpected, but very effective touch is the love that begins to blossom between one of the OSS operatives, Bernay, and a young radio operative, which shows the meaningful, but often short-lived, connections between people who were in the thick of the war. 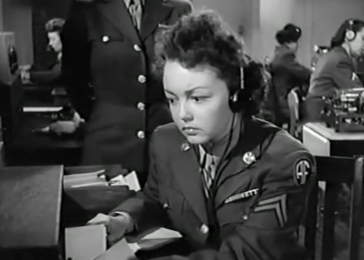 Even our villains are not two dimensional cardboard cut outs. Amadeus Brink, played very well by Harold Vermilyea, a corrupt Gestapo officer who assists the OSS operatives for his own gains, has quirks that make him memorable and real for the audience. You can imagine a self serving louse like him really existing amongst all the supposed other devoted members of the death squad. But the main villain, Meister, a psychopathic, slick Gestapo officer who develops a personal vendetta against Applejack, especially John and Iaine; is played extremely effectively by John Hoyt. Later on he takes to wearing an eyepatch, and although this type of Nazi villain would later be caricatured, in this film he is truly a nasty Nazi piece of work. Hoyt, like Conrad Veidt in Casablanca, imbues this high ranking Nazi officer with a terrible darkness, a void of the soul.

The end of the film is extremely difficult to watch, but it shows the terrible sacrifices that those who were part of organisations like OSS undertook. How it was because of people like them that vital intelligence was gathered that would be instrumental in winning the war. Although there is a high-ho American spirit that surges at the end with triumphant music, there is also something bitter about it. How the men and women who gave up so much were often lost in the waves of time. There names do quite rightly appear, according to the official CIA website, on the south wall of the Original Headquarters Building lobby. This film thankfully tries to humanise those whose names appear on that wall, which is made clear by Ladd’s closing lines in the film, where he imagines that Ellen could have been a girl who came from a town in America just like him.

This is my second and final contribution for The World War II Blogathon being hosted by Cinema Essentials and Maddy Loves Her Classic Films. Please visit their blogs to read more tributes to this monumental historical event.